Danish pubcaster DR has named a TV2 producer has its new drama chief after the exit of the long serving Piv Bernth. 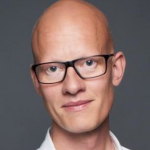 Christian Rank (pictured), who has been described locally as the “wonder boy of Danish TV drama” will transfer to his new post on February 1.

He has previously produced dramas Avringerne (Inheritance) and Lykke (Happiness) for DR, and has a strong track record in Danish television drama.

His hire comes after the well-known Bernth and her deputy, Lars Hermann, exited the pubcaster to launch drama outfit Apple Tree Productions, which has ITV Studios as a financial backer.

While at TV2 Rank led production on shows such as Rita and Norskov.

He will now oversee a drama division of 25 staff, and will initially focus on building a “strong new organisation” within DR Drama.

“At a time when we are experiencing an explosion in the volume of TV shows from home and abroad, it is more important than ever to ensure that DR can continue to contribute original and relevant fiction narratives that reflect and discuss our common life and society in relevant and entertaining manner,” he said.

“I have great respect for DR Drama’s recent successes, and at the same time I am very aware that it is necessary to think of new opportunities and solutions in order for DR to continue delivering significant and relevant tales to a wide audience.”

“DR’s drama series are a cornerstone of DR’s public service offering,” said DR cultural director Tine Smedegaard Andersen. “Over many years, Danish drama series have been able to gather the people around big stories about ourselves and the time we live in, and I look forward to Christian Rank building on that success, and also further developing DR’s strong fiction offer for a new era.”