Hollywood women hit back at harassment 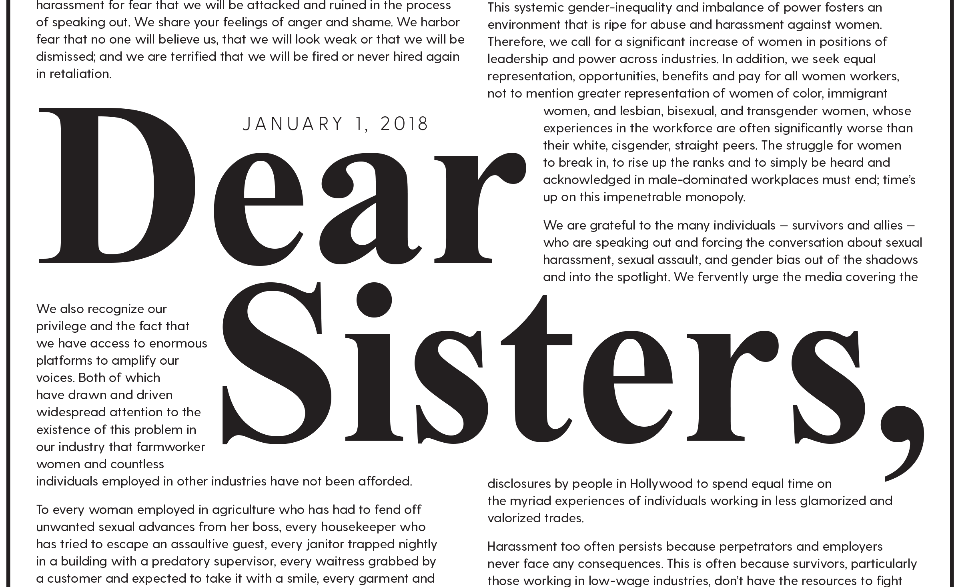 More than 300 women working in film, television and theatre are backing an initiative aimed at dismantling the culture of harassment in entertainment.

Major producers such as Shonda Rhimes and stars including Reese Witherspoon and Emma Watson are supporting the initiative, which will be known as Time’s Up.

The campaign against harassment has grown in strength since a series of New York Times articles revealed the extent of the problem, with a major exposé of Harvey Weinstein initially kicking off the movement.

Yesterday, an open letter published in the NYT and on a timesupnow.com website was posted calling out the “dark truth of ongoing sexual harassment and assault in the entertainment industry”.

The campaign will focus on supporting victims, holding perpetrators to account, calling for more women in senior positions, equal pay, better representation of all gender and race groups, and urging media outlets to continue covering allegations.

“We are grateful to the many individuals – survivors and allies – who are speaking out and forcing the conversation about sexual harassment, sexual assault and gender bias out of the shadows and into the spotlight,” the note read.

Time’s Up noted that “harassment too often persists because perpetrators and employers never face any consequences”, and revealed its signatories would be seeding a legal fund to help victims across industries challenge responsible parties.

The campaign group noted it had received a message of support from a union representing female farm workers, who have also come forwards with their own allegations.

“We fervently urge the media covering the disclosures by people in Hollywood to spend equal time on the myriad experiences of individuals in less glamourised and valourised trades,” it added.

“We remain committed to holding our own workplaces accountable, pushing for swift and effective change tyo make the entertainment industry a safe and equitable place for everyone, and telling women’s stories through our eyes and voices with the goal of shifting society’s perception and treatment of women.”

Star Wars producer Kathleen Kennedy first had the idea for the initiative.

Time’s up on silence. Time’s up on waiting. Time’s up on tolerating discrimination, harassment and abuse. #TimesUp Sign the solidarity letter & donate to the @TIMESUPNW Legal Defense Fund: https://t.co/eTwKtOboIl pic.twitter.com/q8aok1HTGg