Netflix and Amazon’s content investments have rocked the television business to its foundations, but can the real titans of tech – Facebook, Apple and their kin – usurp them and win the war for audiences of the future? TBI reports

Twenty-eighteen will provide the backdrop to an onslaught into the international content business. While Netflix and Amazon Prime Video were the first to disrupt the power bases of TV commissioners around the world, these SVOD giants now face the might of social technology’s true behemoths, as Facebook, Apple, Snap Inc and Google rally the troops ahead of their own programming expeditions.

“We are at pivotal point in TV for sure, as Apple, Facebook, and Google and YouTube have indicated that they want to be serious players,” says Vanessa Shapiro, Gaumont’s president of worldwide distribution and coproduction. “These companies have deep pockets, which is bound to lead to an even more competitive market.”

Some say we’ve heard these sorts of stories before, and that it is the traditional studios and broadcasters that ultimately keep the business going. The difference this time is Facebook and Apple are hiring key programming executives from these exact players.

Facebook began its move into content, which is said to include a US$1 billion investment into original shows for the new Watch platform, by hiring CollegeHumor co-founder Ricky van Veen. He keynoted at MIPCOM, explaining to a roomful of potential friends and enemies why he’s since hired ex-MTV scripted chief Mina Lefevre and what Mark Zuckerberg truly means when he says video will be Facebook’s “primary driver” in coming years.

Among the key announcements was a deal with Simon Fuller’s XIX Entertainment to produce an English-language version of influential Norwegian teen drama Skam (Shame), which came about after Fuller acquired US rights. Van Veen, the co-founder of online video site CollegeHumor, described Skam‘s unusual episode length and release pattern format as “the future of storytelling”. 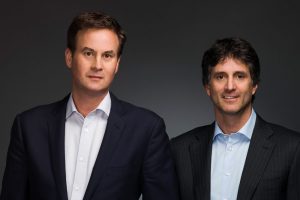 “There is a tendency for technology firms to underestimate the challenges and risks of producing great entertainment, so I’m encouraged when they hire entertainment industry veterans to shepherd their investments,” says Ed Barton, chief analyst of entertainment at media and technology analysis firm Ovum.

This all apes the moves Netflix made bringing in former studio execs such as Scott Stuber and Bela Bajaria, and Amazon when it brought in FremantleMedia’s Georgia Brown as European originals chief.

Apple is also reportedly copying Netflix on the Los Angeles real estate front – just as the SVOD giant opened an office in the Hollywood Hills that literally looks down on the studios, Apple is believed to be close to buying the famous Culver Studios, literally walking distance from Sony.

Snap Inc, the parent of Snapchat, has also been engaging the content business, with VP of content Nick Bell recently saying that it would not be long before the Gen Z-skewing social platform commissioned its first scripted programming.

In August, Facebook unveiled its first batch of originals, some it funded and some it didn’t, with the likes of A&E, A. Smith & Co and National Geographic debuting shows.

“It feels like being in the Wild West at the start of the Gold Rush,” says one producer with direct knowledge of Facebook’s strategy. However, the social media giant that claims to want to connect the entire world through its newsfeed is not planning to continue to fund shows forever, and is planning to eventually revert to a revenue share model.

“Facebook is going through what Netflix and Amazon went through to or three years ago – they know what they want, but don’t know how to do it,” the producer adds.

Furthermore, there’s no guarantee audiences really want to watch programming from Facebook, (though its recent Humans of New York doc series has drawn in an average 4.5 million views per episode at press time).

Apple, meanwhile, hasn’t even got a distribution platform for its shows yet besides Apple Music, which in branding terms at least, is not fit for purpose.

“It is much easier to spend US$1 billion on making shows than it is to get one million people to watch them,” says Ovum analyst Barton. “The challenge facing emerging video platforms is in helping audiences discover and watch shows on platforms which many aren’t accustomed to watching long-form content on.”

Google-owned YouTube certainly believes millennial and even Generation Z audiences prefer the over-the-top route to the traditional channels. It has been ordering original shows for YouTube Red since February last year, and appears to be all in on the SVOD service. Last month, it scrapped its premium channels business, which had allowed producers and content owners to offer paid-for networks, saying it had “never achieved popularity”.

Barton predicts an intensified fight for the best content is coming – or it could be already here, in fact. Facebook has secured a multi-million dollar deal for NFL content, while Amazon won an auction for ATP tennis rights. Many believe pay TV models will truly come under intense scrutiny when premium sports are no longer purely theirs to fight over.

Ultimately, the advent of the digital giant could be a huge benefit for producers and consumers. “Hopefully, Snap and Facebook use some of the unique qualities of their respective platforms to inspire some new and innovative content and also give their talent enough time to really understand their platforms and audiences,” says Barton.

Maybe, just maybe, the tech giants hold the upper hand in the war ahead.