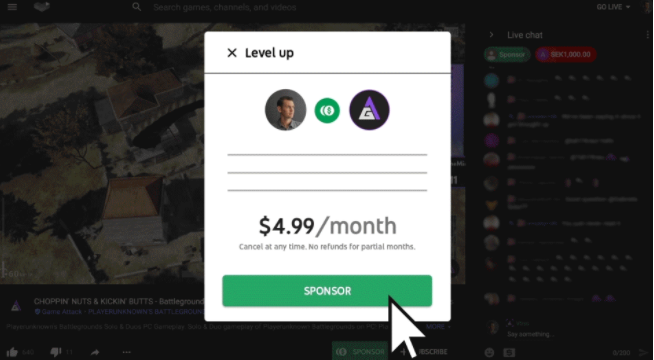 YouTube has ended its 2013-launched paid channels initiative and has instead introduced sponsorships in a bid to help content creators make money from the site.

Sponsorships will widely be available to YouTube Gaming users from this week and are currently in closed private beta for non-Gaming channels.

With sponsorships, fans can purchase Twitch-style digital goods directly from a user’s channel and support creators via monthly recurring payments of US$4.99, or a local equivalent.

Sponsors get perks like ‘custom badges’ and ‘custom emoji’ that will make them stand out from other viewers in YouTube’s live chats. They also get access to sponsors-only live chat.

To be eligible for Sponsorships on YouTube Gaming, channel owners must be 18 or over, have a live-streaming enabled Gaming channel that is monetised, have at least 1,000 subscribers, and live in one of 41 supportedcountries.

“Whether your channel is still new or you’ve been a creator for years, we want you to be successful, and sponsorships is part of a wider effort to help build your business on YouTube,” said YouTube product manager Barbara MacDonald in a company blog post.

“As we focus on growing your revenue through YouTube Red, Super Chat, and now sponsorships, we’re bidding farewell to a service we launched in 2013 called paid channels.

“This service offered monthly subscriptions for some channels, but with less than 1% of creators using it today, it never achieved popularity with creators or users.”

In May 2013 YouTube first allowed a small group of partners to offer paid channels with subscription fees starting at US$0.99 per month. Initial partners included Jim Henson Family TV and Sesame Street.

The scheme was widened out to any channel “in good standing” and with at least 10,000 subscribers in October of the same year in 11 countries, with more countries added in the months following that.