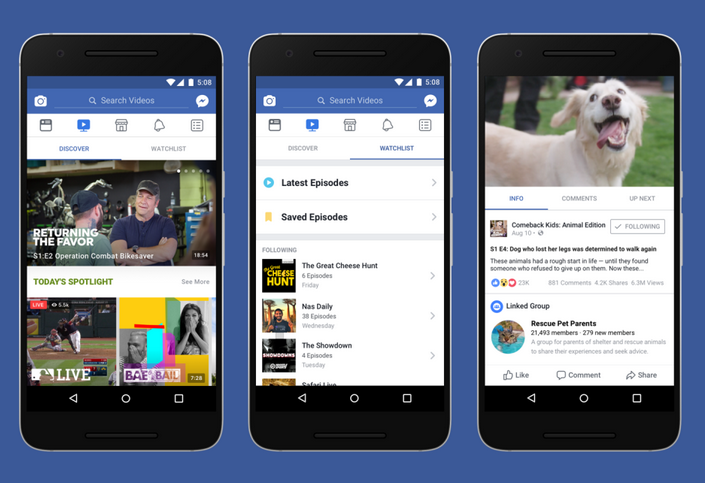 Facebook has launched a new platform for episodic programmes, as it makes a bigger push into original video and attempts to lure content creators to the site.

Facebook said it intends Watch to be a platform for creators and publishers to “find an audience, build a community of passionate fans, and earn money for their work”.

The platform aims to be a home to a wide range of shows – including reality, comedy and live sports – with Facebook funding some of these to “help inspire creators and seed the ecosystem”.

“Watch is comprised of shows, a new type of video on Facebook,” said Facebook vice-president of media partnerships Nick Grudin. “Shows are made up of episodes – live or recorded – that follow a consistent theme or storyline.

“Shows are a great format if you want to share a video series, like a weekly cooking show, a daily vlog, or a set of videos with recurring characters or themes.”

Watch will initially roll out to a limited group of users in the US before becoming more widely available, with creators able to monetise their shows “over time” via advertising.

“We’ve been testing Ad Breaks over the past few months, and we will be slowly opening up availability to more creators to ensure we’re providing a good experience for the community,” said Grudin.

Initially a “limited group of creators” will be able to post shows to Watch, but Facebook said the platform will soon roll more widely with content makers already able to register their interest in creating shows.

With the launch of Watch, Facebook is also launching ‘Show Pages’, which are designed to make it easy for people to understand what a show is about, watch episodes and other related videos, and connect with communities that have formed around a show.

Facebook said the type of content it believes will work well on Watch are: shows that engage fans and community; live shows that connectdirectly with fans; shows that follow a narrative arc or have a consistent theme; and live events that bring communities together.

Returning the Favor is one of the shows that Facebook is funding – a programme that follows TV host Mike Rowe as he shines a light on people “doing something extraordinary for their community”.

Facebook Watch is the latest step in Facebook’s evolving video strategy. The social network first started testing live video streaming in the US in December 2015, before rolling out Facebook Live to the rest of the world in 2016. As of April this year, Facebook said that one in five videosbposted to the site is now a live broadcast.

Meanwhile, Facebook last year launched a video tab in the US, offering a dedicated place for users find videos on the site, and hired the co-founder of comedy site CollegeHumor, Ricky Van Veen, to lead its global creative strategy.

Speaking on Facebook’s second quarter earnings call last month, CEO Mark Zuckerberg said he thinks video will be a much bigger driver of Facebook’s business in the next few years than Facebook Messenger or WhatsApp.

Watch will be available on mobile, desktop, laptop, and as a part of Facebook’s TV apps.