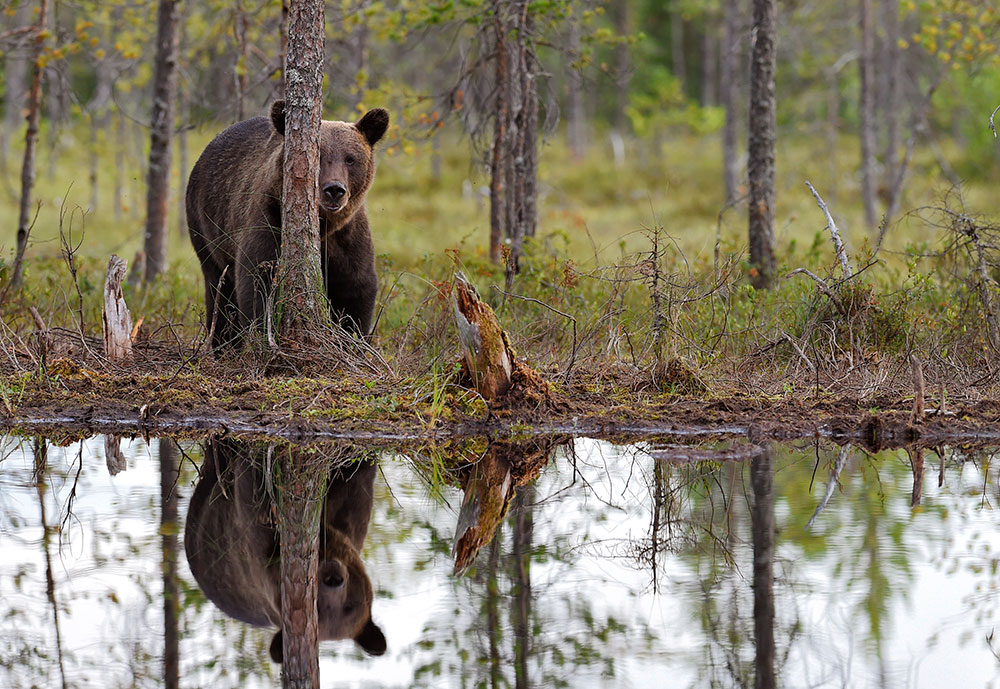 A total of 12.26 million people viewed the first episode of the David Attenborough-fronted series, 40.9% of the TV viewing public, meaning it became the highest rating natural history documentary in 15 years. Its second episode, ‘Mountains’, was watched by 1.8 million 16-34-year-olds, compared to X Factor’s 1.4 million in the same week.

Anthony Geffen, CEO and creative director of Atlantic Productions and a regular collaborator with Attenborough, says the BBC Studios Natural History Unit series went above and beyond the standard factual television. “It’s a beautifully crafted series for a start, with the voice of Attenborough on top of it, music by Hans Zimmer, and amazing technology, but the point is it’s doing more.”

The influence of Attenborough, wildlife broadcasting’s most well-known talisman, played its part, as did new filming and storytelling techniques.

Geffen says the entire genre is changing: “Now that the cameras and technology are going into the animal’s perspective is really significant.”

After working with Attenborough on eleven projects, Geffen knows there’s always drama in the natural world, and it’s a case of working out the narrative and capturing it. New technology allows filming crews to capture never-seen-before footage and create new scenarios.

Geffen suggests that engaging audiences on multiple platforms is central to attracting younger viewers. He cites the example of Atlantic’s Great Barrier Reef with David Attenborough, which was for UK broadcaster BBC One. “We worked flat out across some of the social media platforms and on virtual reality, which bounced back to create a richer experience and greater ratings,” he says.

Diversifying through new platforms has helped to engage a new generation of conservation enthusiasts. Atlantic’s 20-minute immersive VR experience of the Great Barrier Reef had a sell-out run at London’s Natural History Museum, with lots of positive feedback from millennials.

Geffen suspects that the VR experience, which was also shown in Australia, may even have had a minor impact on the Australian election, as citizens seemed to take the importance of the Great Barrier Reef into the voting booth. While only a small percentage dive on the reef, visitors flooded into 100-200 seat theatres ten times a day.

Geffen hopes to capitalise on the opportunity wth millennials with Atlantic’s Mission Galapagos (above) on BBC One, as part of a three-part series which will air in early 2017. It features presenter Liz Bonnin taking part in a scientific expedition, exploring what conservationists are doing in the field. Atlantic was keen to push technological boundaries with the project, and worked with manufacturers to find new and innovative ways to capture wildlife from a different perspective.

Another UK-based prodco, Icon Films of the natural history production enclave in Bristol, has also focused on pushing the boundaries of new technology in natural history.

Harry Marshall, creative director of Icon, says this is because blue-chip programming is evolving quickly, much like the animals it aims to capture – and some of these changes are altering the demographics.
“Natural history filmmaking needs to obey the most important principle of natural history,” he says. “We need to evolve; we need to adapt to survive. You can’t stay like you are, so evolution is the key to success.”

He gives the example of Icon’s flagship blue-chip documentary Savage Kingdom (above), produced for Nat Geo Wild, which follows a pride of Lions in Savute, Botswana, likening the elements of the programme to the arcs of characters in high-end, epic television drama.

Marshall uses the specific example of a lioness, Matsumi, who oscillated between fearing her male mate, who killed her cubs, and seeking his protection as a parallel with HBO’s swords ‘n’ shields epic Game of Thrones.

“Natural history tended to be self-censoring, but we decided we really wanted to push the envelope a bit more, and obviously Game of Thrones was the big series on HBO,” he says.

“I don’t know why natural history feels that it should be in some way given diplomatic immunity not to chase ratings, and not to be as contemporary and zeitgeist as any other genre.

“We focused on the rise and fall of individuals, and the stories of power and betrayal, greed and hubris. You’ll find all of those traits in Game of Thrones.”

Furthering the sense of dramatic scripting, Marshall recruited Charles Dance, who plays arch overlord Tywin Lannister in Game of Thrones, as narrator. “He totally saw the parallels between Game of Thrones and Savute, and the same visceral life and death struggle for power,” says the Icon creative chief.

The documentary has since been commissioned for a second season, titled Savage Kingdom II, which will be launched at the end of this year.

Marshall says that the character development in season one makes season two a “richer” prospect. “It’s about development and depth, and that you can’t get in just clips that people pop up and watch on YouTube,” he adds.

However, there are certain, distinct characteristics of television viewing amongst millennials – Marshall claims “they’re snackers and bingers”. He says the middle ground is disappearing, and people either want an immersive box-set binge or a short ten-second action clip such as of a lion being stomped on by a charging giraffe.

The binge-watching generation comes with perks, of course. The development of new players in the market with large budgets such as Netflix and Amazon, make original commissioning of natural history documentaries a more viable prospect – indeed Netflix has commissioned a four-year project, Our Planet, which comes from the team behind the original Planet Earth and debuts in 2019.

Natural history can attract the same kind of millennial audiences to the online streaming services, claims Marshall, making for a “very exciting prospect” for programme commissioners and producers alike. He says: “All of my colleagues are salivating at the prospect of being commissioned on Netflix or HBO Now.”

CuriosityStream is part of this new streaming generation. The two-year-old SVOD service specialises in science and natural history programming. Chief programming officer Steve Burns has a three-strand approach to content: using the newest technology to open up wildlife habitats to scientific discovery, hearing directly from wildlife photographers themselves, and adding blue-chip documentaries such as Blue Planet and Planet Earth to the service, some of which can be watched in 4K.

One of CuriosityStream’s most-successful documentaries is David Attenborough’s Light on Earth (above), a natural history one-off focusing on the small creatures lighting up our oceans and forests. The science-based documentary is a coproduction with Terra Mater Factual Studios, Ammonite and the BBC.

There has been a clear rise in natural history subscribers on CuriosityStream, claims Burns, though the service does not currently break that down into demographic parts and doesn’t give out subscriber numbers. Much like Geffen, he acknowledges the importance of new media platforms in changing viewing patterns.

“Mobile is increasing across the industry, certainly on our site, but we can be viewed on any format, including your big screen TV and your desktop,” he says. “We’re finding people who are watching us on all three of these platforms, so mobile’s a very strong element.”

Meanwhile, UK-based Barcroft TV specialises in engaging audiences through short-form documentaries across media platforms. Sam Barcroft, founder and CEO of the Barcroft Media Group, says: “Our company started as a news company, so a lot of the content we put up online are mini-documentaries, and that is because over the past few years the mobile phone has become the predominant way that young people consume content.”

In this format, he says, it is easier to reach young people with shorter pieces of content. Short-form also has the advantage of economy: long-form works less well on advertiser-funded video-on-demand platforms such as YouTube.

Barcroft says that although his streaming service connects most often with younger audiences, it was not a conscious choice by the company to go after them: younger people just tend to have the time and inclination to watch video content on their phones.

For Barcroft, image quality isn’t everything, unlike many factual producers at the more expensive end of the production pile. “A lot of the content that we produce is shot in a news format rather than a blue-chip natural history format,” says Barcroft. “We use a lot of user-generated content where you would say the quality is a lot lower than if it was shot professionally, but from our point of view, it adds an air of authenticity, which is really important to drive engagement.”

Some still associate UGC content with teenagers’ camera phones, but the reality is often far from it. The Barcroft Animals YouTube channel makes series such as Wildest Animal Rescues from NGO footage of medical procedures. The channel’s most recent video was of a turtle injured by a propeller, which was filmed by aid workers and vets, and received a lot of engagement on Facebook.

The ubiquity of phone cameras nowadays is also creating opportunity. “If you add a television producer’s mindset to great content, you can tell stories really well, and if you have the power of social media distribution on top of that you can share them across the world instantly,” says Sam Barcroft.

With over 111,000 subscribers to its YouTube Barcroft Animals channel, the company incorporates clips from that platform into full shows. “We view it as a development incubator for long-form premium series,” says Barcroft.

The latest project is a long-form version of Snapped in the Wild, and Barcroft hopes to expand this incubator format to another show, Cute as Fluff.

However, the digital firm acknowledges the importance of longer blue-chip documentaries too. “Planet Earth is one of the things that made me happiest in recent times in our industry, because it’s shown that wonderful creativity mixed with amazing real moments in natural history still has a huge audience,” says Barcroft.

That said, he notes that these productions cost a lot of money, so there is room for Barcroft Animals to exist besides BBC Earth, Nat Geo Wild and Animal Planet.

Even at the high-end, execs note that, comparatively speaking, the genre is not as expensive as dramas, especially those such as Game of Thrones.

Natural history programming, like the wildlife it represents, is constantly adapting and evolving in order to survive and capture new audiences. When Vice Media chief Shane Smith spoke at the Edinburgh International Television Festival earlier this year, he summarised what was behind the hipster brand’s success in capturing millennial audiences, pushing the boundaries and updating the format, but actually using relatively traditional subject matter.

“We changed our brand from a hipsters’ bible talking about rare denim, cocaine and supermodels to doing environmental programming, social justice, women’s issues, and, of course, music… And guess what? Our business grew. Our audience exploded. We made more money, which is good because more money means more content.”