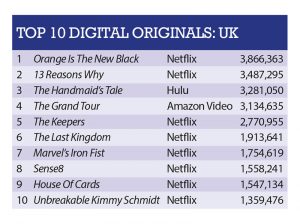 The series has been hugely well received after its debut on US streaming service Hulu, and the fact it landed third place in our Digital Originals chart despite not debuting on screen until the final day of data capture (May 28) shows demand for the series is significant.

The UK ratings confirmed the interest, with nearly two million tuning in during its 9pm slot, well ahead of the slot average and aging up the audience from the usual younger adult crowd.

However, it wasn’t the most-wanted series in the UK last week. That honour went to Orange is the New Black, which jumped to the top of the chart after its fifth season was leaked online in late April.

The series just beat the buzzy teen mystery 13 Reasons Why to first place in the digital chart, news that followed the hacker distributed a large portion of the fifth season before Netflix’s scheduled worldwide release date. 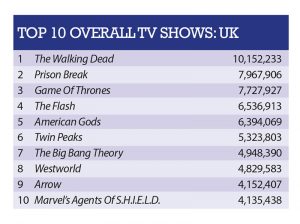 The Handmaid’s Tale was 18% behind OITNB in terms of demand expression, but was still ahead of series such as Amazon’s The Grand Tour and Netflix’s House of Cards, both of which are waiting on new season launches.

Netflix’s latest true crime doc series The Keepers, which looks into the unsolved murder of a Baltimore nun, reached fifth position, while usual favourites Marvel’s Iron Fist and House of Cards placed down in sixth and ninth places respectively. Unbreakable Kimmy Schmidt charts after the debut of the comedy’s latest season.

The Walking Dead dominated the overall chart, however, with its 10.15 million average demand expression more than two million ahead of the second-placed Prison Break. Game of Thrones was third – surprising in a week when a first full season seven trailer was released.

The Flash was fourth, ahead of American Gods, which is releasing episodes weekly despite sitting on Amazon’s subscription VOD service.

Twin Peaks’ return propels the series into sixth place, ahead of The Big Bang Theory, Westworld, Arrow and Marvel’s Agents of S.H.I.E.L.D.

As with Handmaid’s Tale, critics and audiences have warmly received the show, with modest debut broadcast numbers on Showtime in the US boosted by a significant streaming uptick during the week.