Netflix’s 13 Reasons Why went straight in at number one in the latest in Demand charts from Parrot Analytics having been released at the end of last month.

The teen mystery series, based on the New York Times bestseller, beat another recent Netflix launch in the digital originals chart, the controversial Marvel’s Iron Fist ranked second, defying the critics, who widely panned the series. 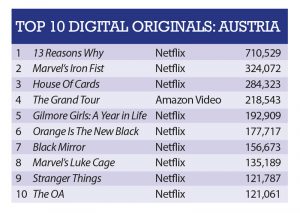 Amazon’s only entry was Jeremy Clarkson and chums’ global motoring romp The Grand Tour, which placed fourth. Aside from that, it was all Netflix, with staples House of Cards and Orange is the New Black faring well, and newer offerings Black Mirror and The OA also featuring.

Gilmore Girls: A Year in Life was ranked fifth in the chart this week even though it was released last November as a four-part miniseries revival on Netflix.

13 Reasons Why had double the demand of Marvel’s Iron Fist making it the clear favourite in Austria. Netflix’s House of Cards, meanwhile, had 30% more demand than Amazon’s The Grand Tour. The Kevin Spacey-fronted political drama returns with new episodes on May 30.

In terms of Demand Expressions for all TV shows, the top two has a familiar look, with The Walking Dead’s zombies leading out the many clans battling for the Iron Throne in HBO’s Game of Thrones.

US cable series Pretty Little Liars completes the top three, followed by the inmates of Prison Break and then the ever-popular geek comedy The Big Bang Theory. 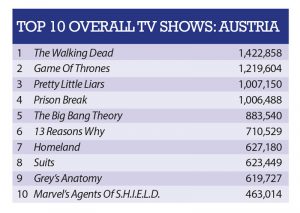 Mimicking its success in the digital originals chart, 13 Reasons Why makes the overall ranking, placing sixth and gaining the distinction of being the only SVOD series in the top ten.

Finales and premieres skewed the overall rankings. After six popular seasons, Showtime’s Homeland ended on April 9; high demand for this event caused it to rise to be the seventh most in-demand show in Austria.

Fox’s Prison Break also reappeared in the top ten after it began airing new episodes on April 4. Also, the release of the HBO network promotion videos for Game of Thrones on April 12 caused the demand for this title to increase, up 21% compared to Freeform’s Pretty Little Liars.