Following a surprisingly inauspicious start, The Grand Tour is now motoring ahead of the competition. The big budget Amazon Prime Video car series leads both the latest digital and overall demand charts in the UK, our latest report shows. 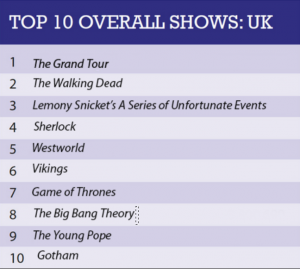 In the overall chart, the Jeremy Clarkson-fronted digital original took more than nine million average demand expressions, putting it almost one million ahead of zombie drama The Walking Dead.

The news will be music to the ears of Amazon, which often plays second fiddle to Netflix in the TBI/Parrot Analytics In Demand Charts.

A second place finish for The Walking Dead, which plays locally on pay TV channel Fox UK, is a good result considering the series is currently on a midseason break and does not return until Monday, February 13.

Third place in the overall table is also a good start for Netflix’s latest original, comedy-drama Lemony Snicket’s A Series of Unfortunate Events. The gothic series based on the novel and movie that came before it took an average of 6.76 million demand expressions, ahead of Sherlock in fourth (6.17 million). The latest season finale of the detective series met with a mixed reaction, with critics reacting badly to what they said was a jarring plot, visuals and tone.

Behind Sherlock is Westworld, which led the overall chart in December following the conclusion of its first season. Locally it plays on Sky Atlantic, where its first episode did better ratings business than Game of Thrones managed back in 2011 (1.84 million v. 1.45 million). 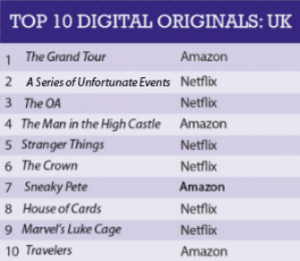 Thrones itself takes seventh place in the latest chart (4.98 million), behind Vikings (5.35 million) and ahead of The Big Bang Theory (3.99 million). The Young Pope and Gotham round out the overall chart.

Parrot analysts say the worsening performance of Westworld and Thrones is down to a lack of new episodes, which often sees shows lose the ‘buzz’ that surrounds a fresh original.

With The Grand Tour and A Series of Unfortunate Events well ahead of the digital field, another Netflix series, The OA, takes third place with 3.52 million average demands, which is slightly too few to rank in the overall chart.

The Man in the High Castle (fourth, 3.26 million) and new effort Sneaky Pete (seventh, 1.75 million) mark a good week for Amazon, whose original content investments need to begin paying off in a big way now it is a global service in search of fast subscriber growth.

Netflix series fill the remaining digital spots, in the shape of Stranger Things, The Crown, House of Cards, Marvel’s Luke Cage and Travelers.