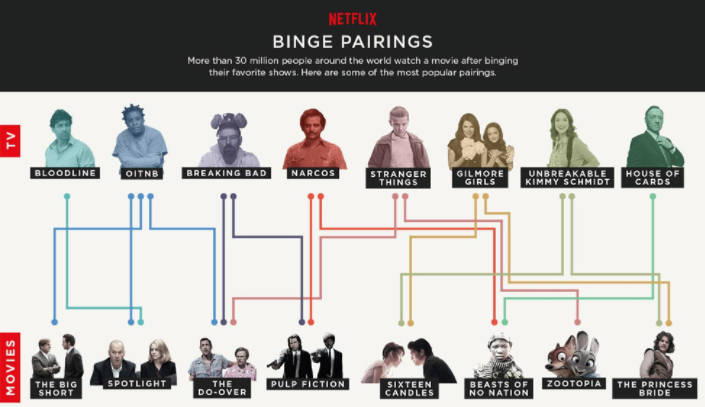 Netflix says it has identified a new trend among its members whereby they integrate movies into their series binge watching.

The US streaming service redefined and gave new life to the term ‘binge watching’ and has now lifted the lid on how its customers weave features into those bingeing habits.

Netflix identified the trend by analysing the viewing habits of 86 million customers in 190 territories between January and October this year.

In a post on the research Ted Sarandos said that amid the ongoing talk of a golden age of TV drama, films still have an important role on the SVOD service.

“It’s interesting that in this golden age of television, movies are consistently in demand on Netflix,” said Ted Sarandos, chief content officer, Netflix. “What we’ve come to figure out is that movies are really an important part of people’s viewing routines and complementary to the way they watch and enjoy TV.”

The comments came in the same week that Sarandos said movies do not differentiate TV services from one another. Noting that Netflix’s movie content accounted for about a third of viewing, he said that consumers “passionate about watching” a particular movie would see it before the window in which it is available either to HBO or Netflix.

The movie content on the platform is therefore intended for “a more dispassionate audience” and is “not likely to differentiate you from everybody else”, he said.

The new research, however, underlines an important accompanying role that films can play. Netflix – like rival streaming service Amazon Prime Video – is notoriously shy to reveal any viewing data. It has, however, now revealed more about its subs viewing habits.

“A new trend in watching has emerged with more than 30 million Netflix members around the world weaving film into their binge routines,” Netflix said.

It also revealed that 59% of customers take a break lasting about three days after finishing a drama series before embarking on a new one.

In that break period, 61% of members will tune into a movie. Netflix suggests popular series and feature film pairings include The Princess Bride and Unbreakable Kimmy Schmidt or The Big Short and Orange is the New Black.

Other series-film matching examples Netflix subs are choosing include House of Cards and Beasts of no Nation, which was a Netflix original movie. Bloodline and Spotlight, Breaking Bad and Pulp Fiction, and Gilmore Girls and Dirty Dancing were other series and film matches.

In other instances viewers are turning to feature docs after bingeing a series. Narcos’ fans, for example, are switching to drugs docs Cartel Land and Narco Cultura.

The binge watching and movie matching trend does not apply, however, to comedy. Netflix says its customers choose comedy to break their viewing rhythm, for example lightening the mood after viewing horror offerings.

To illustrate the point Netflix pointed to pairings including Stranger Things turned and Zootopia, and American Horror Story and Mean Girls.