The Middle East and African SVOD sector will “still be very immature by 2021”, with major players like Netflix tipped to only make modest progress, according to new stats.

The Digital TV Research report predicts that the region as a whole will have 19.59 million paying subscription video-on-demand subscribers by 2021, with Netflix accounting for 17.2% of these with 3.37 million subs.

“Although the top five international players will enjoy rapid growth, they will account for less than half the region’s SVOD subscribers by 2021 – showing that, despite some signs of congestion already, there will still be room for new entrants,” said Simon Murray, principal analyst at Digital TV Research.

Despite remaining “immature” the report notes that there have been many SVOD launches in the MEA market during the last couple of years, with more tipped to come. 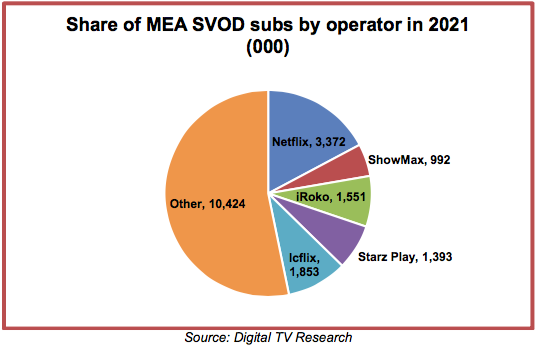