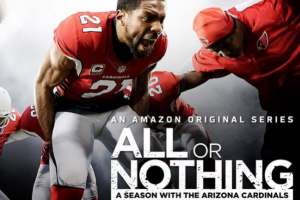 Amazon is preparing to launch All or Nothing: A Season with the Arizona Cardinals, a factual series following the eponymous NFL team.

The Amazon order for All or Nothing actually predates Netflix greenlighting Last Chance U.

Both series will launch next month, with Amazon’s All or Nothing bowing on July 1, getting a headstart on Last Chance U, which launches on July 29.

With both streaming services equally secretive about viewing figures, however, it will be hard to ascertain the most popular of the two.

Jon Hamm (Mad Men) will narrate the Amazon series, which will run to eight episodes.

It will be made by NFL Films and follow the Cardinals from the draft, ahead of the season, to the championship game.

Amazon will also offer a dubbed version of the series in Spanish, the first time it has done so with one of its originals.

Tags: All or Nothing: A Season with the Arizona Cardinals, Amazon, Netflix