Drama’s prolonged period in the sun doesn’t seem like ending any time soon. In fact, it feels like it might go on longer than anyone could have predicted.

In the US, there are near-on 70 cable channels commissioning shows, while Europe has seen an explosion of free and pay TV channels and producers coming together to create programming that would have been unimaginable in scale and regularity a decade ago.

That’s why we’re conducting the TBI Scripted Survey 2016, which will reveal why, where and how the genre is evolving, tackling the big issues with anecdotal evidence and data gathered from the world’s top scripted executives. Lights… camera… action!

Why is there so much scripted programming in the global market?

One surprising facet of the international television drama market in 2016 is the sheer amount of high-end shows regularly launching. MIPTV and MIPCOM have become mini-festivals where international shows matching the quality of US drama and comedy debut, while smaller events such as Berlinale and Seriés Series are acting as conduits for more for premium drama and spaces for creators to come together.

The reason why there is so much drama? For many sampled in our survey, the answer is simple. “It’s because there have never before been more channels and platforms with that huge need for content,” says Jörg Graf, RTL’s executive VP of productions and international acquisitions.

“There’s a huge demand for drama from all players, SVOD platforms or broadcasters,” confirms Patrick Nebout, founder of new French prodco Dramacorp. “This is, in its turn, driven by international audiences’ hunger for great stories. In a very unstable world, great story-telling can help us better understand the world we live in, and also offers a cost-efficient way to escapism.”

Keren Shahar, managing director of distribution Keshet International puts the demand primarily down to “the proliferation of OTT platforms – Amazon, Netflix and local services – who have the budget to invest in original dramas”.

Alejandro Odeja, executive director of international at Spanish producer Boomerang TV, says the demand is also being propelled by American cable channels such as HBO and Showtime committing to developing high quality, high cost productions; and Scandinavian drama defining European efforts in the thriller space. “This boom has meant the transfer of writers and talent from the film industry to the small screen,” he adds.

Ojeda’s compatriot, Javier Méndez, who is head of content at Mediapro, says there has been a boom in high-end, limited run series. “There is a great demand of this kind of content all over the world,” he says. “People are used to seeing eight-hour stories. We need to provide their ‘food’.”

Zodiak Rights’ head of scripted Caroline Torrance adds that the advent of binge-watching and SVOD networks mean that “viewers feel they are able to commit to eight to ten part series, as they have the flexibility to watch when they want”.

“With constant expansion and the introduction of new platforms worldwide, there is a growing need for original scripted content,” adds Peter Iacono, president of international television at US studio Lionsgate Television. “Simply put, with more platforms and more demand for content, there is a greater need to supply premium programming. New platforms and traditional broadcasters are seeking brand-defining original material that sets them apart in an increasing competitive marketplace.”

The evidence shows the scope and ambition of producer and broadcasters have significantly expanded in recent years – with so much well-produced, well-casted and well-written content around, producing a sub-standard product is potentially devastating for channel brands seeking to stand out in a fragmenting landscape.

“Everyone has recognised that what original programming provides is the ability to build a distinctive brand,” says Carmi Zlotnik, managing director of US premium cable channel Starz.

“It’s clear that we all have come to virtually the same conclusion:  the content with the most stickiness for consumers and our business partners is drama,” adds Harold Gronenthal, executive VP, programming and operations for AMC Global and Sundance Channel Global. “A hit drama – a critically-acclaimed drama – can become a truly defining programme.”

For Gene Stein, president of Gaumont Television, drama has filled a hole in the wider media market, by taking the “opportunity to serve a market that is increasing left behind by the major film studios: character-driven projects with A-list talent”.

Many execs note that TV drama now fills a space occupied by features.

“TV drama is taking the place of mainstream films, in a movie landscape dominated by franchise-based blockbusters and small indie or authorial movies,” says Maria Cervera, director of international coproductions at Spain’s Plano a Plano.

Put another way, Stephen Cornwell of The Night Manager producer Ink Factory, says: “A broadly based, intelligent and engaged audience that used to look to cinema to provide them with interesting and challenging stories and characters increasingly now looks to longer form and continuing narrative on television to do that for them.” 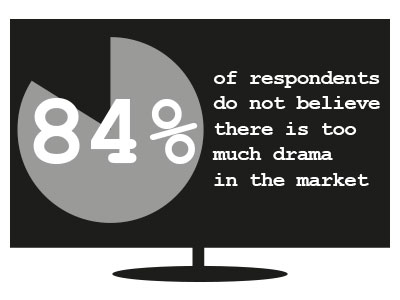 However, with a market full of high-end productions, alerting viewers to their existence has become a greater challenge. “With channels competing more and more for a diverging audience, the best way to grab their attention is through dramas that lend themselves to marketing and ad spend,” says Lila Hurst, founder of British programme finance boutique Drive.

Dan March of Dynamic Television points to a similar phenomenon. “The competition to attract audiences has never been fiercer, and original drama series are marketing vehicles that can be promoted, advertised and talked about,” he says. “These are shows designed specifically for their audience, they create and position their brand, and they give broadcasters a purpose in an otherwise crowded market.”

“Quite simply, there is a lot of really great, high quality storytelling out there and the spectrum of offerings allows all audiences, both broad and niche, to be nicely served,” says Mike Wald, executive VP of international distribution at Sony Pictures Television.

While many make the link between contemporary TV drama and film, Endemol Shine Studios president Sharon Hall, likens the new wave of TV series to reading a page turner. “The experience of experiencing a TV drama is akin to devouring a great novel, and so for the consumer, there’s no limit on this kind of content”.

Korbinian Hamburger, one of a new wave of German screenwriters from the Serial Eyes writing collective, poetically says the genre’s popularity is “because life is drama. Everyone can relate to it in some way”.

More broadly, TV drama has become an alternative to traditional premium content, according to analysts. “It hits the sweet spot as long-form premium content that consumers will pay to see, and is still cheaper to acquire than premium sports, and cheaper to make than movies,” says Nick Thomas at research firm Ovum.

Guy Bisson, research director at Ampere Analysis, echoes the point that drama is increasingly fulfilling a similar role to that occupied by feature films and sports rights. The volume of drama on the market is, he says, “simply because high-quality drama is the new TV battleground. Sports and blockbuster movies are not the drivers of paid-TV that they once were”.

Most of our respondents expect the drama market to get better in the next 12 months, suggesting demand remain intense. “When that changes, the trend will die off,” says Dan Whitehead, head of drama and digital at UK-based programmes research house K7 Media.

But for now, “New platforms and channels are springing up like mushrooms, and existing outlets are starting to move into new territories”, says Amelie von Kienlin, Red Arrow International’s senior VP of scripted acquisitions and coproductions.

“We acquired Wentworth, the Australian prison drama, and played it in the heart of our peak schedule with great success and it’s still running,” she says. “Five years ago I couldn’t have seen that happening.”