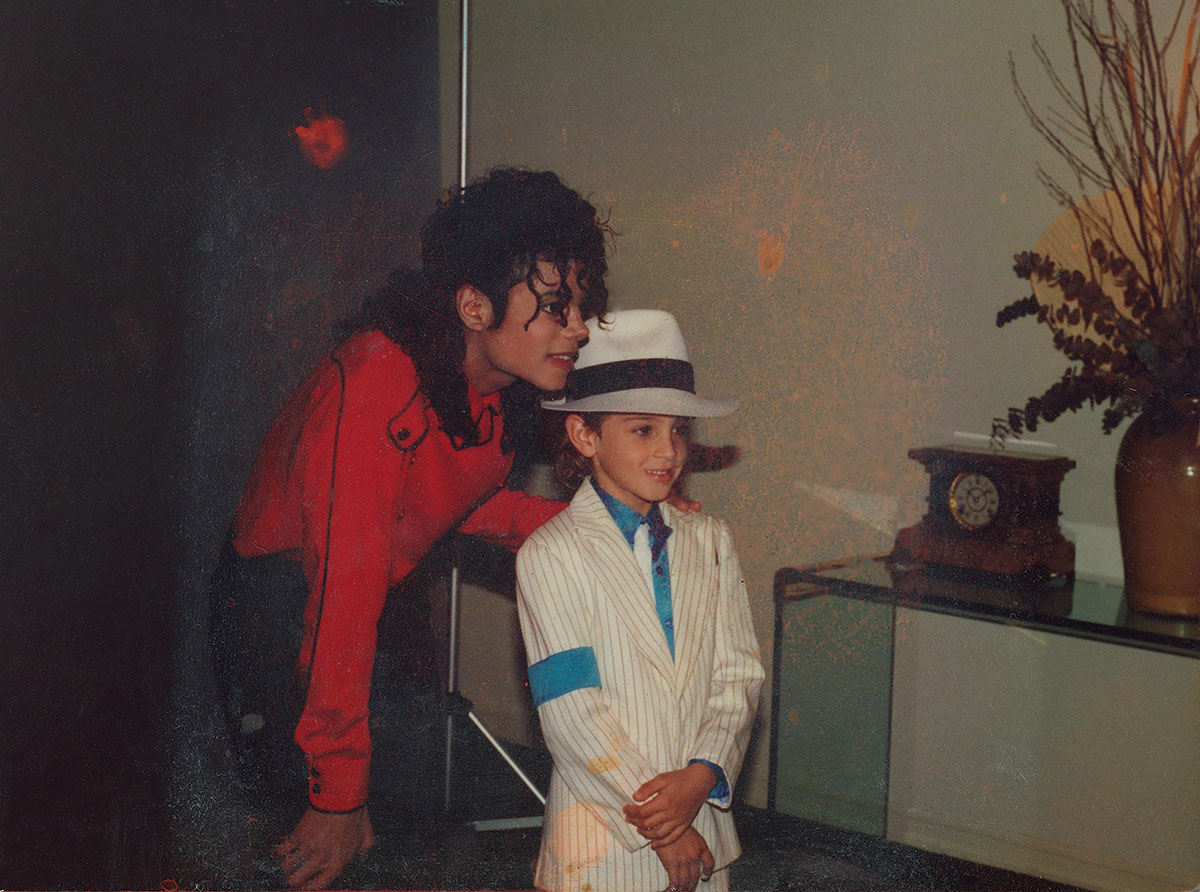 Unscripted content has faced intense competition in recent years as viewers have been deluged by drama but the genre is fighting back and interest is soaring, providing opportunities aplenty for distributors

It is fair to say that distributors of unscripted content are feeling pretty bullish right now. While drama remains centre stage for some viewers, the breadth of unscripted programming on offer is surging and buyers are proliferating.

So perhaps it is no surprise that 64% of unscripted distributors said demand for their programming had increased by more than 25% over the past 12 months, with a further 8% stating that it had surged by more than 50% over that period. And given those figures, which suggest business has been going rather well over the past year, it is even more noteworthy that 96% of respondents believe their businesses will improve further over the next 12 months. 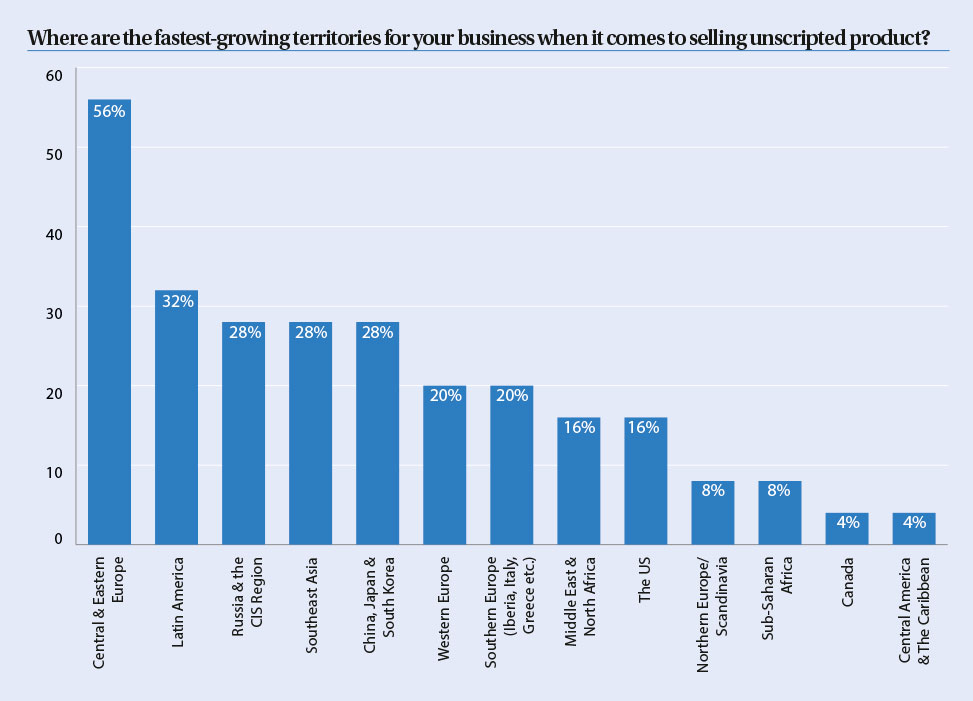 There are positive feelings about the entire industry, in fact, with 84% believing the market will improve over the next year. And every company said they had grown their catalogues over the last 12 months. But that is also where the picture becomes slightly less rosy.

While demand for product has risen (32% of respondents said buyers had increased by 10% over the past 12 months and a further 36% said the number of buyers had risen by more than 20% over the same period), it is clear that issues such as rights ownership and financing and investment are major concerns, with both being cited among the most pressing issues facing their businesses.

Securing a pipeline of content does indeed appear to be a major challenge, with 44% of respondents saying that the competition to secure unscripted shows has never been greater. A further 40% believe competition has increased but is not at a historical high, but not one company said competition for product had decreased.

“Accessing and controlling rights has been a challenge with the market this year,” highlights Bob McCourt, COO of international at Fremantle.

“We’ve witnessed all broadcasters and platforms fighting for exclusivity and longer holdbacks which can have an impact on second window sales.”

A similar picture is painted by Michael Murphy, general manager at Beyond Distribution, who believes the all-rights deals with SVODs will shift over the coming years.

“Once the current land grab for rights subsides, which it has to do, and the SVODs’ battle for subscribers plays out, and producers realise the limit on returns when all their rights eggs are in one SVOD basket, I predict that rights will start flowing back to broadcasters and to distributors,” he says. 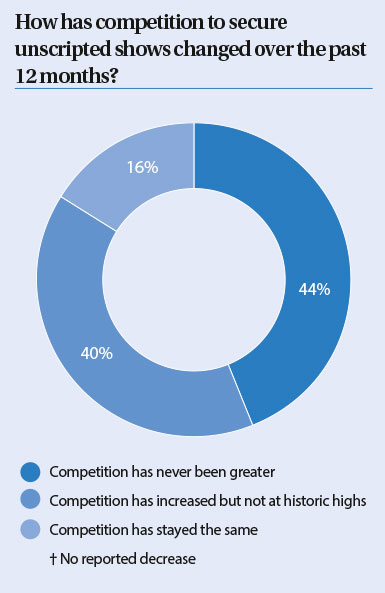 “In line with this, linear channels may lose out on some content to SVODs now, and their budgets and commissioning strategies may have to change, so they too will still need new content. I believe distributors will be well placed to take advantage.”

In the meantime, distributors are focusing their efforts on getting involved with projects at an earlier stage in order to secure rights, a practice that more than three quarters of respondents said they were doing.

“Distributors are no longer seen as the last part of the jigsaw, producers recognise the benefits of nurturing a longer term, collaborative relationship where there is added value in shaping a project with international intelligence and early interest finance.”

And even for companies with associated production companies, the challenge of securing sufficient content can be intense, as Emmanuelle Namiech, CEO at Tinopolis-backed Passion Distribution, points out.

“Third-party programming still represents about two-thirds of our catalogue,” she says. “So 70-75% of our pipeline has been secured from collaborating with independent producers outside the Tinopolis Group but very few producers are not affiliated with a group or broadcaster today and the never-ending market consolidation is making access to content harder.”

And that is not the only challenge. SVOD buyers’ budgets are static in many cases, with more than 50% of respondents stating they have remained the same over the past 12 months. Just over 15% of companies said budgets had risen by more than 25% during that same period, while 16% said the figure was greater than 10%. 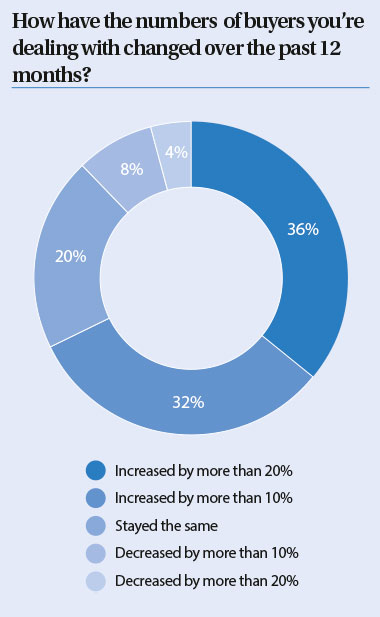 For some, it is a different story when it comes to AVOD, where 40% of respondents said budgets had increased by more than 10%. Yet a similar proportion said budgets from this group of buyers had remained the same, while the cash available from cable and free-to-air networks remains a major challenge for many. Just over 55% of respondents said budgets from these broadcasters had remained the same, with almost 30% reporting a decrease of more than 10%.

“There is no longer the same level of finance put into commissions, meaning channels are looking to distributors to bring in finance from other sources,” says Young at Orange Smarty.

“The international market is also being hit with falling revenues so for this to be a successful model the UK has to support the UK production community and come in with the finances in line with being a lead broadcaster and commissioner. Channels cannot expect the same level of quality without the budgets or a high percentage of the budget to match. At this time, strong established relationships, nimble decision making and exceptional grasp on international intelligence couldn’t be more valuable.”

So which regions of the world are providing most potential? “Asia, Central and Eastern Europe (CEE) and Middle East and North Africa (MENA) continue to grow rapidly year on year,” says Harriet Armston-Clarke, director of distribution at TVF International, a view backed up by the figures. Reflecting a similar trend in scripted and formats, more than 56% of respondents said CEE is one of the fastest growing regions, with Latin America (32%) and Russia and the CIS region (28%) also faring well.

Almost 30% of respondents also said Southeast Asia was among their fastest-growing parts of the world, with China, Japan and South Korea securing a similar response. Such a range, coupled with the increasing interest from SVOD, AVOD and other OTT buyers, highlights the increasing opportunities for those in the unscripted distribution business around the world – if they can get their hands on product, at least.