Jane Tranter has set up Bad Wolf, a new Wales-based prodco that will bring £100 million (US$155.9 million) of investment to the region.

Tranter, the former head of BBC Worldwide’s LA production outpost, has teamed with Julie Gardner,  who was part of her team in the US.

The new company will be based in south Wales at a dedicated studio space. The business will, the Welsh government said, bring £100 million of investment to the British country over the next decade.

Development deals are in the works with US networks and studios, the partners said, with discussions already underway with European partners.

Tranter and Gardner were instrumental in the rebooting and success of sci-fi series Doctor Who, which is produced in Wales. They then relocated to LA to run BBC Worldwide Productions on the west coast, with commissions including Da Vinci’s Demons (below) with Starz and Dancing with the Stars for ABC.

News broke that Tranter was leaving Worldwide and LA to return to the UK in March. Matt Forde was subsequently upped to executive VP, content production, sales and distribution at Worldwide to cover Tranter’s role. 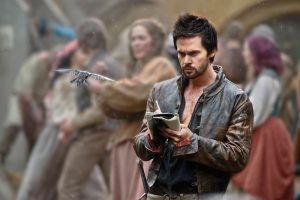 Welsh minister for economy Edwina Hart welcomed the investment. She said: “We want to establish Wales as an international centre of excellence for high-end TV drama production worldwide and this investment is part of our plan to create a long-term, sustainable TV industry in Wales.”

“Bad Wolf has the potential to be a game changer for the creative economy in Wales. The talented Welsh based production company will support one of the largest sustainable TV drama production hubs in the UK outside of London and help increase inward investment, strengthen the supply chain and skills base and create cultural and tourism benefits.”

Gardner, who will remain based in LA, added: “Jane and I have filmed all over the globe and know, first hand, that the talent base in South Wales is world class. We are thrilled to be embarking on this new venture surrounded by such shared talent and passion.”

Bad Wolf is a reference to a well-known Doctor Who theme.