Endemol, Shine and Core have launched their joint enterprise, which has been initially named ‘Endemol Shine Group’. 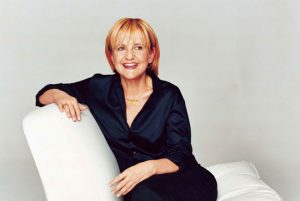 Content sales will be run by Endemol Worldwide Distribution boss Cathy Payne (left). Nadine Nohr (below right) and Axel Kuehn are the highest-profile casualties amid a wide-ranging restructure.

The combined distributor is the biggest in the world outside of the studios and will have a raft of drama, and entertainment titles and formats including Masterchef, Amercan Idol, Big Brother and Broadchurch.

The creation of Endemol Shine Group follows the deal engineered by 21st Century Fox and Apollo Global Management that saw Endemol, Shine and Core Media merged. The company said today that it will use the ‘Endemol Shine Group’ branding initially.

Financial terms of the agreement have not been revealed.

Today, other senior appointments were announced. Payne (pictured) will be CEO of the newly integrated sales and distribution operation. As a result Shine International CEO Nadine Nohr will step down after aiding a “transition” period.

In Germany, Endemol Germany managing director Marcus Wolter will lead the combined businesses of Endemol and Shine as CEO of Endemol Shine Germany.

In France, Endemol’s and Shine’s operations will remain independently operated and be run by Nicolas Coppermann and Thierry Lachkar respectively.

Elsewhere, Endemol’s CFO, Edwin van Es, will take up the same role within the new group. Shine finance director Tom Fussell will step down in 2015 as a result. Boudewijn Beusmans becomes Endemol Shine’s group commercial officer having been chief legal and business affairs officer at Endemol.

On the public relations side, Shine’s director of communications, Patrick Keegan, and Endemol’s global head of PR, Charlie Gardner, have been appointed as Endemol Shine Group’s co-directors of marketing and communications, overseeing both areas for the new joint venture. Keegan will be based in London and Gardner will be relocating to LA.

Endemol Shine will be based in Amsterdam, Netherlands, at the home of Endemol’s previous HQ, with sales and distribution now based out of Endemol’s Shepherd’s Bush office.

Peter Hurwitz will remain in his current role of president of Core Media and Scott Frosch will stay as company CFO, as previously announced.

“For the group and distribution teams of Endemol and Shine to be united they need to be able to work under the same roof as one, which we hope to be by the spring of 2015,” said Shine Endemol CEO Turner Laing.

“The rationale for the name is equally simple. By combining Endemol and Shine in alphabetical order we’re launching with a strong identity that says who we are and which will be recognised across the industry.  We will review this as we work together and the group evolves over the first year.”