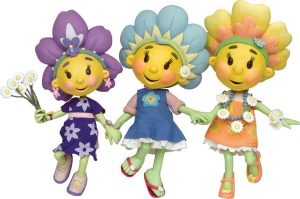 DreamWorks has bought the Chapman Entertainment library giving it kids series Fifi and the Flowertots, Roary the Racing Car and Raa Raa the Noisy Lion to feed into its catalogue.

The titles will sit alongside those from Classic Media, which DreamWorks acquired last year for US$155 million.

They will be sold via what was the Classic distribution unit, which is based in London.

Keith Chapman has created numerous hit kids series including Bob the Builder, which was produced by Hit Entertainment, which sells it internationally.

DreamWorks will be selling the titles it has picked up at MIPJunior and MIPCOM.

He added: “The Chapman acquisition reaffirms our commitment to UK-based productions of distinction and we look forward to delivering brand new TV adventures from these popular series.”

The deal gives DreamWorks over 200 new episode of kids content.

The Studio is also producing new series, including a new version of Noddy with Gaumont for France Télévisions and Turbo F.A.S.T. for Netflix.

Chapman meanwhile has recently made a new series Paw Patrol for Nick.