The executives running the content arms of Amazon and Xbox have separately told TBI they have serious reservations about the Netflix model of releasing all episodes of an original series at once. 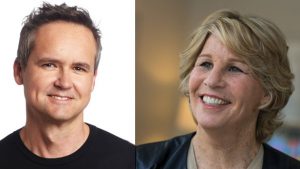 Amazon Studios is about to release a slew of originals for its Amazon Instant Prime service in the US following a fruitful wave of piloting, while Xbox Entertainment Studios is working on a range of original content across genres ahead of the launch of  Xbox One later this year.

Xbox Entertainment Studios president and ex-CBS network president Nancy Tellem (above right) told TBI: “Catch-up, which is what Netflix is, suits binge viewing. I think with some projects, and as we develop content associated with games or with events, it might not be the optimal opportunity [for us] to focus on binge.”

Amazon Studios director Roy Price (above left) also voiced reservations, telling TBI that withholding some installments of a series is a good way to build anticipation and that simultaneous releasing effectively means delaying a launch as the entire show needs to wrap production first.

“It’s possible there is a middle-ground hybrid model,” he told TBI. “That may be episode one, or one through three, and then release the others as they become available.” He added: “One may be too few and thirteen may be more than enough.”

Amazon announced its first five original series in May, which were selected from a pool of 14 pilots. They included political comedy Alpha House, which will star John Goodman; Betas, about four roommates trying to get a social media start-up off the ground; and kids series Annebots, Creative Galaxy and Tumbleaf. It has since greenlit two more pilots, The After from Chris Carter (The X-Files) and kids series Maker Shack Agency.

Xbox Studios, meanwhile, is making a Halo live-action series. The upcoming show, based on the computer games franchise, will be executive produced by Steven Spielberg.

Studio boss Tellem, who joined Microsoft last year, echoed Price’s thoughts on holding back episodes to build buzz and said that in reality most people will not binge watch even if they think the notion is appealing.

“I think it works from a psychological standpoint from a consumer perspective and that people like to think ‘If I want to watch it I can”, but the reality is most people don’t do that,” she said. “There is a value to giving each episode a bit of space, to allow it to generate conversation and discussion… it depends on the content, but you want to build interest.”

The cautiousness of Amazon and Xbox to follow in Netflix’s footsteps comes as the latter pushes ahead with its all-at-once release strategy. So far, it has launched all of its originals – House of Cards, Arrested Development, Orange is the New Black and Hemlock Grove – in this way and shows no signs of amending release plans.

The US-listed company is notoriously reluctant to share any viewing information, professing not to even divulge numbers to Kevin Spacey, the lead actor in House of Cards. However, unofficial data based on an analysis of internet traffic suggests less than 1% of its US customers binge watched the whole first 13x60mins season of House of Cards at launch. Similar data shows a higher proportion of subs watched half-hour comedy series Arrested Development.

Both Amazon and Microsoft have yet to clarify their exact release models for original content and both said internal discussions are ongoing.

Nancy Tellem is speaking at the RTS Cambridge Convention later today. Roy Price is giving a keynote address at MIPCOM next month. Full interviews with Tellem and Price will be in the upcoming MIPCOM issue of TBI.