Gains in IPTV failed to offset losses in cable and satellite in the second quarter of 2013, analyst firm IHS reported, meaning the last time Canadian pay TV recorded growth was in the third quarter of 2012. 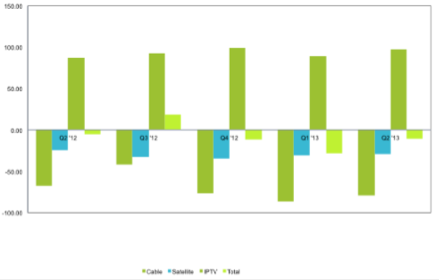 Cable and satellite subs continue to nosedive, collectively losing 108,160 during the second quarter, though 97, 360 new IPTV additions – mainly for Bell Media and Tellus – kept the losses down.

IHS reported Shaw Cable had lost 40,000 subs after selling its Mountain Cable unit to Rogers Communications, which had subsequently boosted its numbers. Canada’s other two main cablecos, Videotron and Cogeco, both saw numbers fall. In total, cable lost 78,900 subs compared with 86,400 lost in Q1. Satellite saw a 29,300 decline, more than the 24,600 in the previous quarter.

This represented an overall seventh straight quarter of decline for Canadian cable, similar to the trend in the US, though IHS analyst for North American television Erik Brannon predicted a la carted offerings, coupled with loosened bandwidth caps, could provide new impetus.

“Although there are positive signs in the economy, pay TV operators in Canada have their work cut out for them to maintain positive video subscriber growth,” added Brannon.

IHS did, however, note the Canadian pay TV was “fundamentally sound” and that the total pay TV number in 2017  would be 11.7 million, only slightly down on the current 11.8 million total.