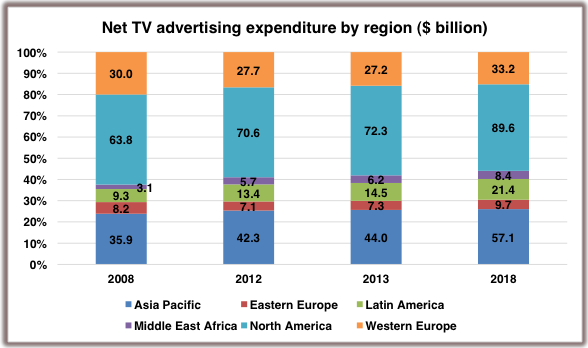 Global TV advertising spend is forecast to reach US$219 billion in 2018 but growth in European growth will lag behind the rest of the world, according to new research.

This would represent a US$53 billion jump from the 2012 figure of US$167 billion, which was up 4.4% year-on-year, according to the TV Advertising Forecasts report from Digital TV Research.

However, global growth is forecast to slow this year to 2.8% due to effects of the on going global recession in several European territories and the lack of major sporting events.

On a positive note, TV ad expenditure will more than double in Latin America between 2008 and 2018, largely thanks to Brazil hosting off the 2016 Olympics and 2014 FIFA World Cup and high inflation in territories such as Argentina.

However, in Western Europe, TV ad spend will be just 11% higher in 2018 than it was a decade, just before the effects of the recession kicked in. Furthermore, most of Eastern Europe – excluding Russia – will find rates still lower in 2018 than in 2008.

This year, most countries of the 55 included in the report will show some improvement but 19, mainly in Europe, will see dips. Digital TV Research expects 2014 to be better, with only Czech Republic and Croatia forecast to decline.

From the US$52.6 billion TV ad spend expected to come between 2012 and 2018, US$18.2 billion will come from the US, followed by an extra US$5.6 billion from China, US$4.6 billion from Brazil and US$3.7 billion from Japan. Argentina, Brazil and Indonesia are predicted to record the fastest growth over the same period.