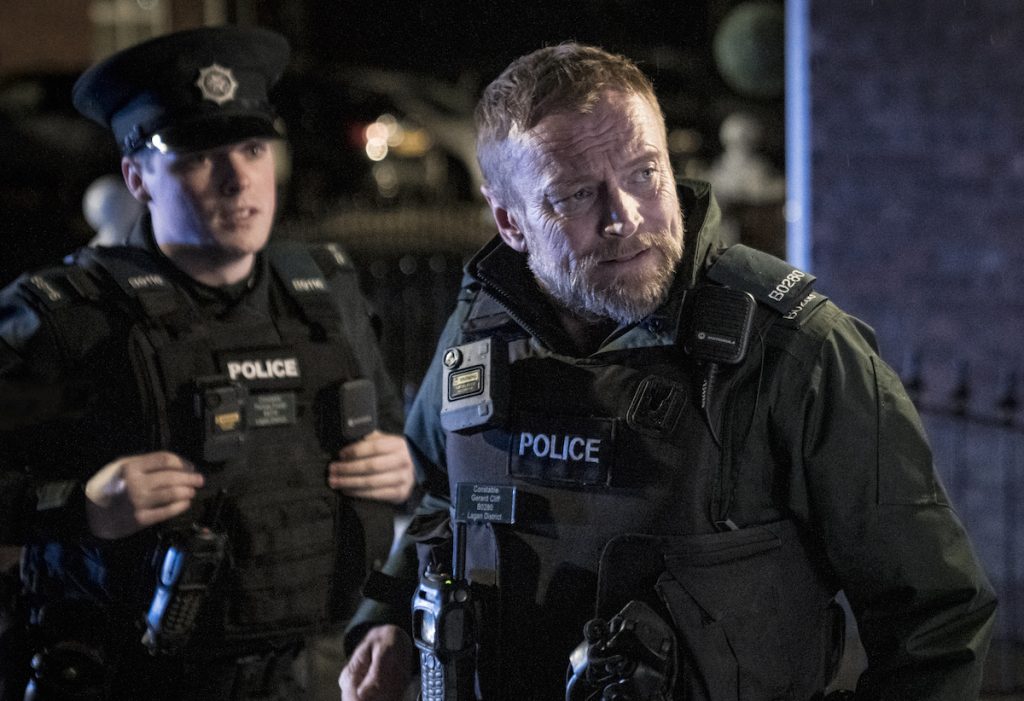 Mark Layton delves into the creative process with screenwriting partners Declan Lawn and Adam Patterson about Blue Lights, their new Belfast-based police drama headed to the BBC later this year

Declan Lawn and Adam Patterson, the writing and directing partners behind 2020 BBC drama The Salisbury Poisonings, are back with Blue Lights, a new six-part series digging deep into the realities of policing in their hometown of Belfast.

Response policing in the Northern Irish city is not like policing anywhere else, say the show creators. Patterson likens it to “trench warfare”, with Blue Lights less about “the complexity of a murder investigation” and more “the simplicity of being punched in the face.”

Blue Lights is set to debut on UK pubcaster BBC One and VOD service iPlayer later this year, while distributor BBC Studios has brought the series to MIPCOM this week, where it is available for international acquisition. 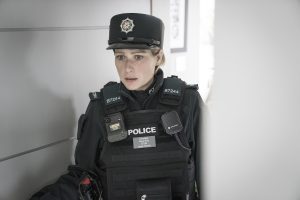 Having already brought Wright on board, Gallagher approached the writing duo with the project. “Someone she knew very well had left social work in Northern Ireland to become a cop at age 41,” explains Lawn. “The experience of that person was really interesting, joining the police in midlife and also coming at it from a social work background.”

Lawn reveals that he and Patterson had always been interested in creating a drama based in their hometown and were intrigued by the project from the beginning.

“This person became one of the central characters in the show – Grace,” reveals Patterson, who says that this allowed them to explore how “the idealism that someone has – somebody who essentially wants to do good in the world – butts right up against the pragmatism of policing.”

From that kernel, the narrative began to emerge, with Blue Lights following three rookie police officers: Grace (Siân Brooke), Annie (Katherine Devlin) and Tommy (Nathan Braniff), each facing immense pressure during their probation and not fully aware of the peril they have placed themselves in by taking the job.

Former social worker Grace struggles to balance the personal and professional; Annie signed up on a whim and now faces hostility from her local community; while Tommy, already earmarked for a senior role due to his academic qualifications, is disastrously inept at practical frontline response policing. 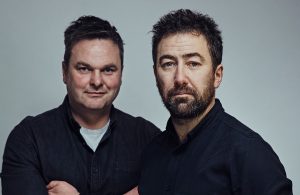 It’s not all doom and gloom, however, as Lawn reveals the show balances “a mixture of darkness and humour”. He adds: “Richard Dormer is a central role in that. He plays Constable Gerry Cliff, always there with the one liner, a natural born rebel.”

Lawn & Patterson met with 25-to-30 Northern Irish police officers, some serving, some retired, which helped to inform their characters and flesh out the world in which they worked. Annie and Tommy, reveal the writers, are both based on real people that they met during this process.

“All of them went through that initial period of being trained in a protective kind of casing of a police college and then suddenly had to transform that onto live duty,” shares Patterson. “It’s particularly interesting in Northern Ireland, because you carry a gun as a normal cop, so with that comes greater responsibility in many ways.”

In 2019, the BBC commissioned a pilot and the first writers’ room, with the broadcaster giving the series the greenlight based on the work that came out of that process “pretty quickly.”

“With these things it almost feels like an age, but actually no it wasn’t, it was a short space of time, it was greenlit and then suddenly they needed a lot more scripts,” laughs Patterson.

Once the pandemic hit, however, the writers’ rooms moved online, with Lawn noting that they continued to work “surprisingly well” and hailing writer Fran Harris, who wrote episode three and co-wrote episode four of the series, as being “really helpful in so many ways in terms of story.”

The show creators add that they “love the writers’ room process” and believe that there “should probably be more of it in British TV.”
“Obviously it’s kind of expensive, but we find that we always come out of that process with something better than we would have had just the two of us,” says Lawn. 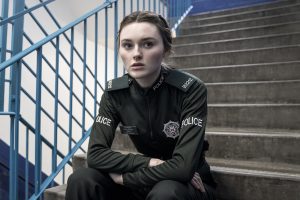 Once the series entered production, there was, of course, the usual balancing act to play between vision and budget.

“We never compromise ourselves in the first drafts. We just splurge it all out there, everything we could ever dream of and then when the producers come back to us and say that’s probably unachievable, then we start accommodating that,” says Patterson.

“At one point we had written a riot scene,” explains Lawn: “And you know what, if we get another season, we will come back to that – but there were certain things that you need; so many extras and such scale. You really have to cut your cloth to the budget.”

Patterson adds: “There was good reason that we had it in the original script, but with the right team – and that includes the producers interrogating the need for things – you [can see] in terms of character beats we don’t really need that in this character drama.

“Could we have afforded it if we really needed it and sacrificed other things? Of course, but in the end it wasn’t really needed.”

“Declan and I always say that the script is a prototype; the director needs to birth it and bring it to life and you essentially hand over your vision. There is no better man that we could have handed over to,” praised Patterson.

“Gilles is just a consummate director who’s done some amazing shows, but he really understands Belfast. He’s filmed here before, he spent a lot of time here and it really takes someone that really wants to understand this place, because it’s very easy to judge Belfast, the world’s been doing it for generations.”

This understanding was essential to the writers, who describe the city itself as another character in the show.

“We’ve always dreamed of making a show in Belfast and Blue Lights is a distillation of everything we’ve learned from living here and being journalists here. We think it shows the city in a way that’s never been shown before in terms of the bad and the good, the kind of vibrancy of it and the problems of it,” explains Lawn.

“There’s no greater test than making a show about that your hometown – because we have to live here after the show goes out – so there’s nowhere to hide,” jokes Patterson. “This place really kind of stands on an acerbic wit, it really defines the city.

“We’ve seen shows really get that wrong, like over-egging it a lot of the time – people don’t talk like that. We knew we would literally be hauled over the coals, not only by our peers, but our families, if we didn’t do that justice.” 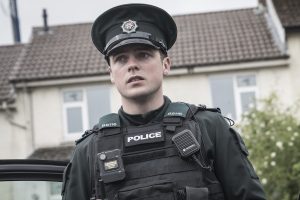 The right side of the law

One huge vote of confidence for the series came from the police themselves, with Lawn revealing: “We showed a couple of episodes to a couple of cops recently and they said it’s the most realistic portrayal of the job that they’ve ever seen.

“That was very gratifying for us, because we put a lot of work into keeping it real down to the tiniest minutiae. To get to get that kind of acknowledgement from them was very important to us.”

Obviously, being a show about response police officers, a lot of time is spent following the characters in their cars. Patterson shares: “Everyone talked about the car as being like the office – that’s where a lot of the camaraderie and the love is born. You’re literally living in 12-hour shifts sitting beside someone, so there’s nowhere to hide if you don’t like each other.

“The car became this really interesting precinct, not an easy one to film by any means; they had to push the boundaries in terms of using pod cars and things – hats off to Gilles and to Stephen Murphy, one of the DPs, for finding a way to retain that energy and drive, whilst filming in an urban environment that has speed restrictions, even for film crews.”

Again, this facet received a thumbs up from the genuine officers. “The cops that watched the first two episodes said it felt real, the sounds and everything, so that was a big tick for all of us that we managed to pull that off.”

As the show prepares to go in front of international buyers, the creators suggest its appeal rests in the “great universality” of its themes, coupled with its “slice of life” view of Belfast.

“Everyone at some point has been in that situation – the minute you walk into your first new job – where you wonder if you are going to sink or swim. There’s a great universality to that,” says Lawn. “But it is a hyper-local show and I think that international audiences like that. That we have a show that is very much of contemporary Belfast is actually a selling point.”