African SVOD subscriptions to triple by 2027 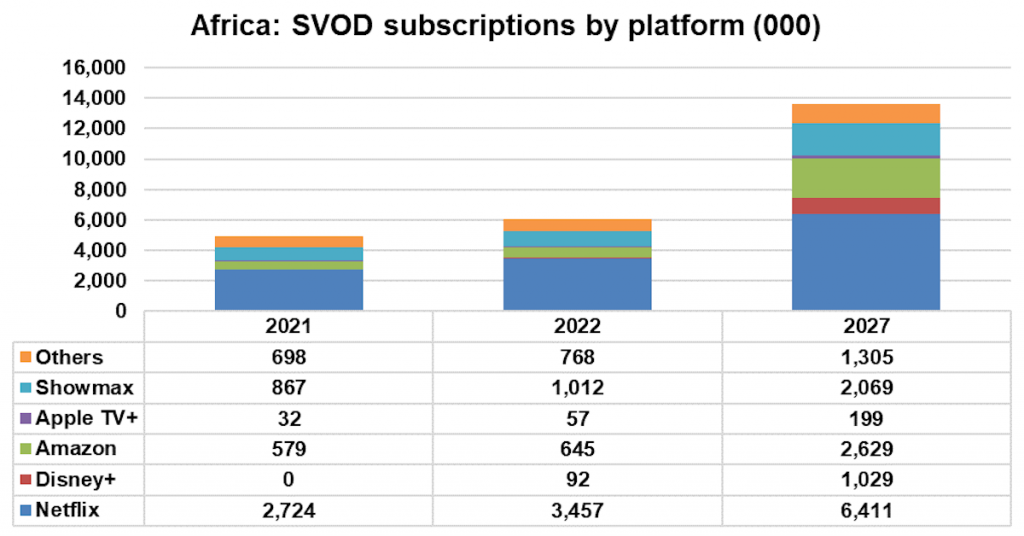 Streaming subscriptions in Africa are set to triple in the next five years.

According to a new report from Digital TV Research, Africa will have 13.64 million paying SVOD subscriptions by 2027, up from 4.90 million at end-2021.

The increasing subscriber numbers will see an increasing penetration of SVOD households, though the figure will still remain low by comparison to more mature markets like Europe. Some 6.6% of TV households will pay for at least one subscription by 2027 – up from 3.9% at end-2021.

Netflix will be the market leader in the region, with 6.41 million subscribers by 2027 – or 48% of the region’s total. Amazon will be second, rapidly increasing its current total of 579,000 to 2.63 million as a result of expansions to Nigeria and South Africa in 2023.

Disney, which recently overtook Netflix as the world’s largest streaming operator, will be slow to expand Disney+ into Africa and hit 1.03 million subscriptions by 2027.

Simon Murray, principal analyst at Digital TV Research, said: “As well as low broadband penetration and low disposable incomes, limited rollout by several global platforms restricts growth. Disney+ will only launch in South Africa and Nigeria. Paramount+ is only likely to start in South Africa. HBO Max will not be a standalone platform in Africa.”