Arabic SVOD base to more than double within five years 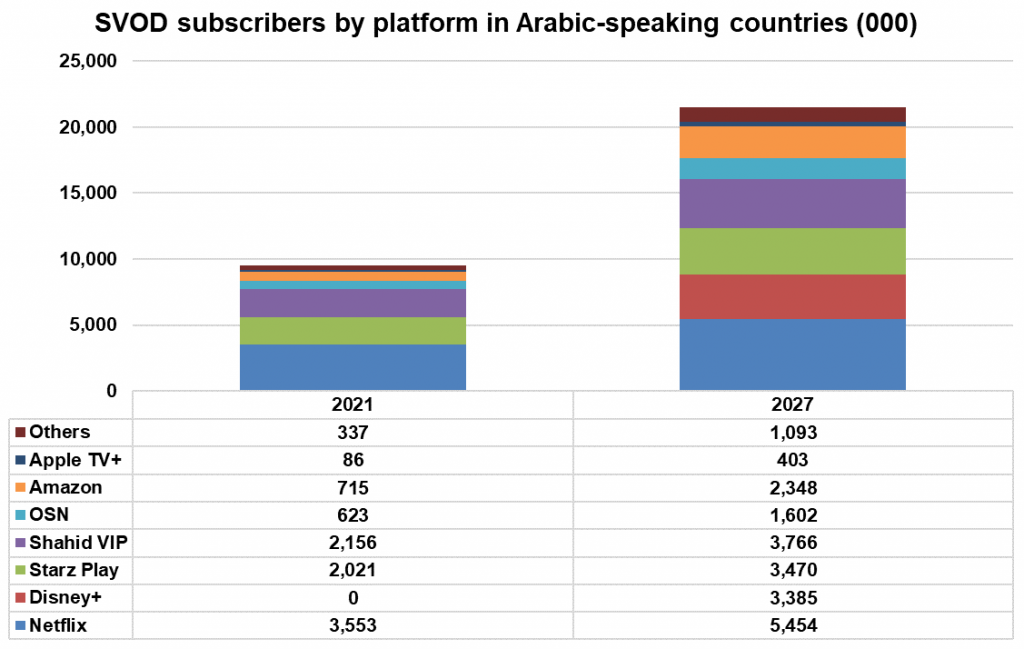 The Arabic direct-to-consumer market will surpass 20 million paying SVOD subscriptions in the next five years.

According to new stats from Digital TV Research, there will be 21.52 million paying SVOD subscriptions across 14 Arabic countries by 2027. This represents more than double the 2021 total of 9.49 million.

The largest player in the region will continue to be Netflix, which will see its Arabic base increase from 3.55 million to 5.45 million by 2027. In second place will be Shahid VIP, increasing from 2.16 million to 3.77 million, while Starzplay will be in third with 3.47 million.

Disney+, which launched in the region earlier this summer, is set to have an explosive launch period to become the fourth-largest player with 3.39 million, with Amazon seeing similarly major growth from 715,000 in 2021 to 2.35 million in 2027.

OSN, which lost some momentum after Disney+ withdrew its content and started as a standalone platform, will retain exclusive rights to HBO Max and Paramount+ content to ensure its growth from 623,000 to 1.6 million subscribers.

Simon Murray, Principal Analyst at Digital TV Research, said: “Netflix will continue to lead the market, although Disney+ has provided a strong challenge since June. We assume that Netflix and Disney+ will add hybrid ad-supported tiers in a pan-Arabic platform from 2024.”