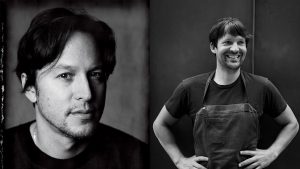 Apple TV+ has ordered a one-hour docuseries from filmmaker Cary Joji Fukunaga and globally acclaimed chef René Redzepi that tells the story of humanity and the planet through eight defining ingredients.

Omnivore will look at the world through the lens of food and explores how food binds and defines us, powers politics, shapes our beliefs, explains our past, and forecasts our future.

The show has been developed by Redzepi, who is behind the Noma restaurant in Copenhagen, along with Fukunaga, James Beard and Matt Goulding.

It will be showrun and executive produced by Xan Aranda (My Love), with Film 45, Noma Projects, Parliament of Owls and Endeavor Content producing.

Apple TV+ has a first-look deal with Fukunaga and is working with the director on Masters Of The Air, from Steven Spielberg’s Amblin Television and Tom Hanks & Gary Goetzman’s Playtone.

The project also marks another foray into factual for Apple TV+, whose slate includes Boys State, The Velvet Underground, and Beastie Boys Story.