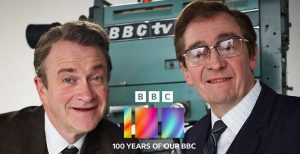 The UK’s BBC has unveiled a raft of new programming to mark its centenary next year, including a kids special and a comedy from Harry Enfield and Paul Whitehouse.

The Love Box In Your Living Room (1 x 60 minutes) is from Balloon Entertainment and will take a look at the BBC’s last 100 years, while Lion Television is prepping Horrible Histories: BBC’s Big Birthday Bonanza! for CBBC.

The show’s will be part of the broadcaster’s BBC 100 strand of programming to mark the centenary of its formation.

Elsewhere, Here’s One I Made Earlier (working title) is being produced by Mighty Scotland Production and follows former Blue Peter presenter Konnie Huq as she explores the best of British children’s programming from the past 100 years.

BBC Studios is behind three-part series David Dimbleby’s BBC: A Very British History, which will trace the impact of the BBC on British life across recent decades, while Crux Productions and The Garden Productions are behind two-part docuseries The BBC’s First 50 Years (w/t).

Charlotte Moore, BBC chief content officer, said: “Our centenary year will be a huge treat for audiences of all ages from massive sporting events, comedy, entertainment, drama, arts and music, to documentaries assessing all aspects of the BBC’s history.

“BBC 100 will celebrate and reflect on the unique role the BBC plays in the lives of audiences across the UK as our much cherished national broadcaster from its creation right up to the present day.”