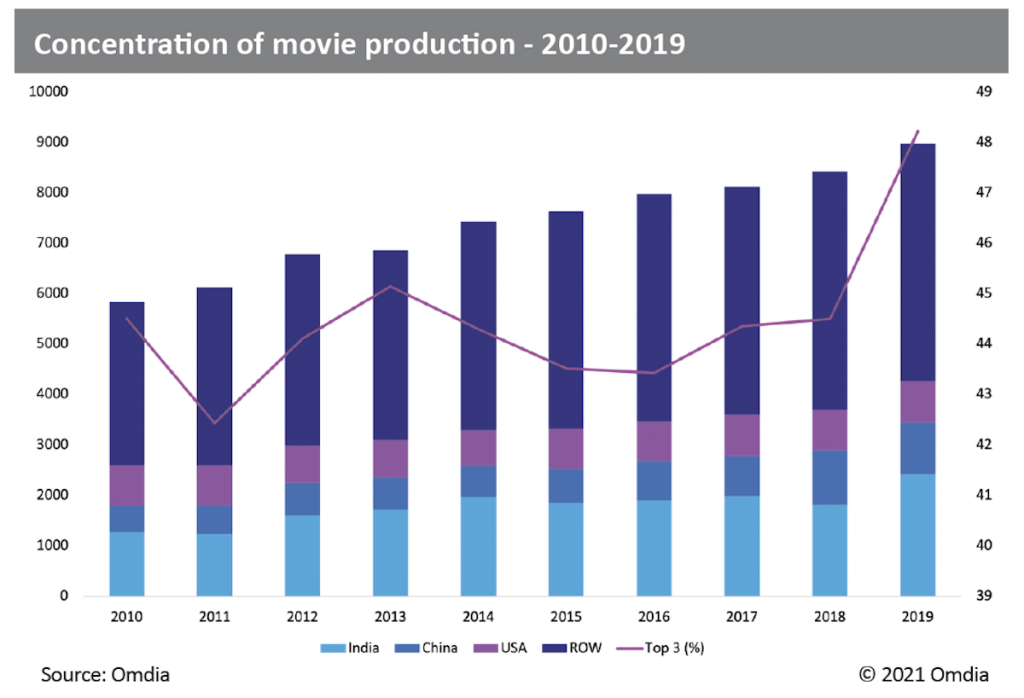 News that Netflix has struck a new long-term deal at Longcross Studios in the UK comes as production space in the country falls under intense pressure, as streamers look to expand their film & TV output.

Yet this is by no means a UK-centric trend. The levels of feature film production have never been higher as the demand for content rises around the world, but there is a turning point coming as producers are increasingly required to choose between a theatrical and streaming route for their films.

Demand for movies remains high and is evidenced by projects such as the UK’s proposed £700m ($950m)  film and TV studio in Hertfordshire. Taking a historical view, the number of films produced has been tracking upwards since the Second World War, albeit steadily until 2003, when the demand for features exploded and the number produced globally doubled in less than two decades.

In 2019, there were 8,977 feature films produced globally. Western Europe, Japan, and the US drove film production from the Second World War until the mid-1950s, when Indian and Eastern European production levels rose and diluted their dominance.

The appearance of TV, and the subsequent massive drop-off in cinema admissions, did not affect the demand for movies. Movie production levels grew steadily in the 1950s, 1960s, 1970s, and 1980s as the screen base grew around the world and most countries began to produce films. 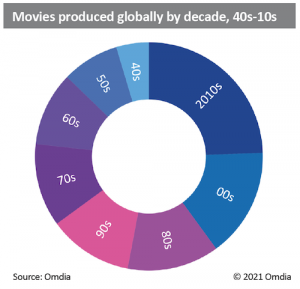 The 1990s saw the first decline in film production, caused by a crisis in cinema-going, ageing cinemas, a subsequent drop in funding by film agencies in Europe and South America, and a fall in the production powerhouse that is India.

The funding declines knocked on to quality levels. However, the drop was reversed in the 2000s as the advent of multiplex cinemas and VHS/DVD revived moribund movie markets. This helped grow cinema screen bases – the principal launch pad for film – and enthuse audiences with cleaner, more vibrant environments, as well as the marketing and consumer success of franchise blockbuster movies.

Movie production in the last decade is almost double that of the 1980s and 1990s, driven by lower costs of digital production, a global growth in modern premium cinema screens, and new technology platforms such as EST and, in the latter half of the decade, streaming. These secondary markets fuel extra revenue and provide more potential rewards for producers.

India is the global powerhouse of feature film production, accounting for over one quarter of all films produced globally in 2019. This creates a self-sustaining market into which the global producers have traditionally struggled to gain a significant foothold.

China is a more recent addition to the upper echelons of major producer countries but before Covid-19 was producing over 1,000 films a year. This has been driven by organised and strategic public support allied to private investment into product for a newly created cinema screen base, which now exceeds 70,000.

The US is a major producer of movies—814 in 2019. MPAA member studios account for just over 100 a year despite these 100 films making up nearly two-thirds of global box office revenue. The top three producer countries accounted for 48.2% of all movies produced in the world in 2019, a recent high as the production sector concentrates further down.

A total of 18 territories recorded an annual output of more than 100 feature films in 2019. The top 10 countries accounted for 72.8% of all films produced during the year (data from 77 countries), the last before COVID-19 hit and changed the production and film landscape.

The excerpt above has been written by David Hancock, chief analyst for Media & Entertainment at research group Omdia, which – like TBI – is part of Informa. The report, Omdia’s Movie Content Tracker, is available here and via Omdia’s monthly publication, Media Tech Digest.