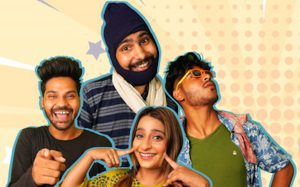 Launching first on 5 August, Yo Yo Yogesh will focus on the realities of Indian families and their relationships, while Chu Chu Ke Funs will debut on 14 August and “finds humour in love and friendship”.

Ridhu Pidhu, meanwhile, will premiere on 4 September and will feature two of India’s youngest new-age YouTube stars and their “family antics and hijinks.”

These new series follow The Q’s success with comedy show BakLol and the recently launched Dum Laga Ke Hasna. The commissions also come just over a week since The Q announced its first TV original, crime fiction series Crime Aur Kanoon, which will debut on The Q channel next month.

Tanya Shukla, programming head at The Q, commented: “At The Q, our belief that youth entertainment can also be family inclusive and fun for all is further strengthened with the increasing viewership we are witnessing.

“The success we have seen with BakLol and Dum Laga Ke Hasna were unexpected. Acting on this and understanding our viewers need for lighter relatable content we are adding 3 fresh series.

“These light hearted  stories with their young protagonists will surely win our viewers hearts in India. Our commitment to infuse the Indian homes with exciting content that is fresh and a little different will continue.”