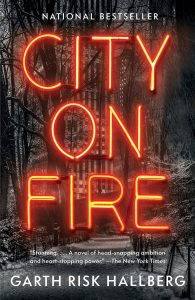 Apple TV+ is expanding its drama slate with a new show based on Garth Risk Hallberg’s 2015 novel City On Fire.

The eight-part series, which will use the same title as the book, is from Apple Studios and Fake Empire Productions, the label set up by Gossip Girl duo Josh Schwartz and Stephanie Savage in 2015.

The company struck a first-look deal with Apple in 2019 and is also producing the reboot of Gossip Girl for HBO Max, as well as Dynasty for The CW.

City On Fire is set in 2003 and follows a student in New York City who disappears on 4 July to meet someone. As the crime is investigated, she’s revealed to be the crucial connection between a series of mysterious fires, the downtown music scene and a wealthy uptown real estate family.

The show, which will launch globally via Apple TV+, joins a raft of IP in the works for the tech giant including Samuel L. Jackson-fronted The Last Days of Ptolemy Grey, Martin Scorsese-directed Killers Of The Flower Moon, and Emancipation, from director Antoine Fuqua and starring Will Smith.