Streamers surge with more than 700 US, UK & EU services launched since 2017 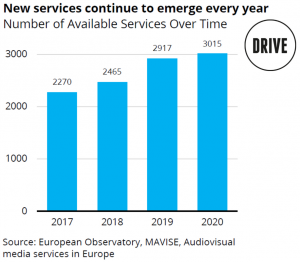 The number of VOD services launched in the US, UK and EU territories has increased by a third since 2017, a new report has revealed.

The report also highlighted the rapid expansion of international sales recorded by UK content producers versus domestic sales in the years running up to the Covid-19 pandemic.

The report, commissioned by UK-based content distribution and financing firm Drive, also highlighted the boom in factual and factual entertainment programming at the start of the pandemic.

These genres briefly represented 40% of all commissioning by streamers such as Netflix, Amazon Prime Video, CuriosityStream and Facebook Watch, as scripted production ground to a halt in Q2.

Drive joint MD’s Lilla Hurst and Ben Barrett said: “Domestic growth has largely stagnated for the UK production sector and it’s clear that many new buyers – of which many more may have launched during the pandemic itself – provide UK producers, particularly in the factual space, more opportunities than ever to create vital international revenue streams.”