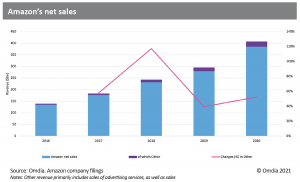 It is currently only available on Amazon’s Android app, but the company has plans to launch on iOS and mobile web over the coming months. The catalogue includes web series, comedy shows, tech news, and food, beauty and fashion content.

Advertising makes up most of the revenue in Amazon’s ‘Other’ category, which grew 52% to $21bn in 2020. The pandemic has boosted the e-commerce company’s online store sales and sponsored search ads.

Other ad properties include ad-supported video streaming service IMDb TV (available only in the US), video livestreaming platform Twitch, and Amazon’s typical 30% share of ad inventory from broadcaster and other ad-supported video apps on Fire TV devices.

The launch of miniTV in India also reiterates the market’s importance for the company, at least in terms of population size and growth prospects. Overall, the US alone contributed more than 60% of net sales in 2020. According to Amazon’s financial reports, the next largest markets are Germany, the UK, and Japan.

Omdia believes that the launch of miniTV is a response to Flipkart Video, launched by Amazon’s local e-commerce rival Flipkart (owned by Walmart) in August 2019. Flipkart Video’s features are similar to miniTV, and it resides within the Flipkart shopping app.

Amazon did not provide any details about the advertising strategy behind the launch of miniTV but Omdia believes that, in the short to medium term, the service will aim to draw more users to Amazon’s shopping app, which will translate into more e-commerce sales transactions.

In the long term, Amazon will monetise users’ shopping data to drive search ads and ultimately bring them further into more expensive, shoppable video ads when the market is ready. This is a proven strategy: one of the key drivers of YouTube’s advertising revenue growth in 1H20 during the COVID-19 pandemic was its direct response, shoppable video ad formats.

What types of shows?

In this case, Omdia expects Amazon to reinforce its ties with local production companies and media agencies to create curated content for miniTV’s audience, as well as include video ads and brand-sponsored content.

Amazon should also think about how to tie up with a local telco to connect with the hard-to-reach demographic in rural areas, which represents a huge untapped market. This would help Amazon in competing head-to-head with mobile network operator Reliance Jio, which had more than 400 million users at the end of 2020 and runs online grocery delivery service JioMart. Amazon was reportedly in talks to invest $2bn in Indian telco Bharti Airtel in June 2020; though there have not been any updates since then.

The article above was written by Kia Ling Teoh, senior analyst for TV, video & advertising, as part of the extensive news analysis service provided by research powerhouse Omdia, which, like TBI, is part of Informa.