The eight-part drama is being made in association with All3Media International, which has secured presale partners in VRT Belgium, who will co-produce, and YLE Finland.

The series has entered production, with principal photography taking place on location in Kirkjubæjarklaustur and around Reynisfjara, the black-sand beach on the south coast of Iceland, which gives the show its name.

Black Sands has been created Ragnar Jónsson, Andri Ottarsson, Aldís Amah Hamilton and Baldvin Z, who will direct the series, which tells the story of a young police detective who is forced to confront her past as she investigates a series of mysterious deaths in her hometown.

“Black Sands is a cinematic and bold show, set in this unique landscape and bringing forth the rich, emotional story telling heritage of the region – as is the way with everything Baldvin Z touches,” commented Glassriver producer Hörður Rúnarsson.

“Channel 2 has been fantastic from day one and we are extremely thankful for the masters of the crime genre, All3Media International, who’ve been instrumental through their unwavering support and belief in the strength of the story and creative vision that we are bringing to the screen.” 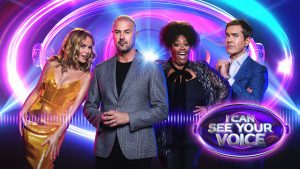 I Can See Your Voice UK

BBC extends ‘I Can See Your Voice’ UK

UK pubcaster the BBC has commissioned a second season of music mystery game show I Can See Your Voice.

The show will return for a second nine-part series (including a Christmas special) on BBC One, following the positive performance of the first six episodes.

The format, produced by Fremantle-owned Thames, and originally created by South Korea’s CJ ENM, has been a ratings success for the BBC, with an average of 3.8m across the first six episodes, a 22% share and a peak of 5.1m viewers.

The series challenges contestants to guess whether a mystery singer is a good singer or bad singer without actually hearing them sing, based on a series of clues, interrogation, and lip sync performances.

The format has been commissioned in 18 countries, including the US version on FOX, and a recent addition in Russia. New versions in Spain, Finland are also on the way.

Kate Phillips, controller of entertainment commissioning for the BBC, said: “We are so pleased that I Can See Your Voice will be returning. I know viewers have really enjoyed playing along with our very funny, frank panel, as we all hold our breaths for those memorable moments when a great or gruesome singer starts belting out a banger.”