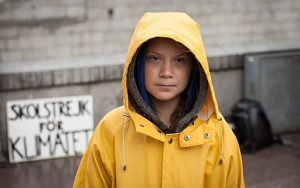 The BBC in the UK has unveiled a raft of new documentaries, including a three-parter being co-produced with PBS in the US that explores Greta Thunberg’s mission to raise awareness of climate change.

Greta Thunberg: A Year to Change the World (w/t) has been commissioned for BBC One and BBC iPlayer and follows the environmental activist as she explores the burning tar sands of the Canadian Oil Industry, the coal mines of Europe and the melting glaciers of the US to show the consequences of climate change.

The show started filming in Autumn 2019 and continued through the pandemic with Thunberg at home in Sweden. It is made by BBC Studios Production in association with B-Reel Films, with BBCS selling globally.

Also on the slate is Football’s Darkest Secret, another three-parter that explores historical child abuse in English football. It is being directed by Daniel Gordon (Hillsborough, The Australian Dream) and is a co-production between Insight TWI, Passion Pictures and VeryMuchSo, in association with Ventureland.

Our Family and Autism (w/t) tracks TV host Paddy McGuinness and his wife Christine after their three young children are diagnosed with autism. The show follows the parents as they meet with other parents of autistic children to see how their experiences differ and whether they can learn from them. All3Media’s Raw produces the show.

Other new docs include: Our International NHS, a one-hour special for BBC One/iPlayer from Uplands Production that sees David Olusoga celebrate the immigrant workforce that has been the backbone of the UK’s health service; Minnow Films’ Bad Influencer (w/t), which is for BBC Three and explores the life of one of Instagram’s first influencers; and fellow BBC Three show When Our Fun Stopped (w/t), which explores gambling and is from Blakeway North.

Clare Sillery, head of commissioning for documentaries, said: “In these extraordinary and often divided times, it is more important than ever for us to be telling powerful, timely stories which offer different perspectives on the human experience.

“The documentaries I am announcing today demonstrate my ambition to grow and support the very best directing talent to make purposeful films that help us better understand the world in which we live; I’m very grateful to all those taking part for sharing their stories with us.”