Southeast Asia offers great opportunities for media companies to scale in 2021, given its vast population. Covid-19 has sped up digitalisation in the market and demand for online video consumption has increased, which in turn is driving demand for internet bandwidth and higher-quality online video services.

Iflix, Netflix and Viu lead the market, however this will change in 2021 after Disney+ expands to more countries in Southeast Asia and WeTV and iflix launch a combined service.

In 2021, Disney+, iflix, and WeTV will acquire more users in the region while stirring up competition among existing online video players. Omdia expects competition in the online video space to intensify in 2021, which will inevitably drive growth but will also lead to a period of market consolidation. We also expect more local players in the region will seek to establish partnerships to regain local market share. Despite growth in SVOD, we expect AVOD will continue to lead the online video market in Southeast Asia in 2021. Localisation and competitive pricing strategies are important; however, content, user engagement and retention remain key to success.

If there is a silver lining to the pandemic, it will be the increased adoption of digital technologies such as online video and online payment. The total number of Southeast Asian consumers going digital has increased tremendously in 2020. Even though average views for online video services will likely retreat after the pandemic, a large proportion of online video subscription services purchased during the lockdown are expected to continue as many of these services have been taken by first time users and pay-TV penetration is low in the majority of Southeast Asian countries. 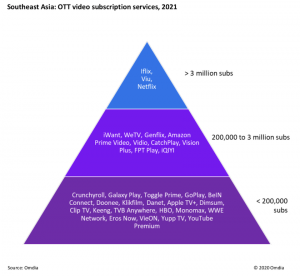 In 2021, the top market players will be very different following Hooq’s exit and Tencent’s acquisition of iflix. After the acquisition, iflix’s operations remain separate from WeTV but we believe they will be merged into one single platform by 2021. Being backed by Tencent and Baidu, both WeTV and iQiyi will have a competitive advantage in terms of both content budget and technology. Viu, which has very similar focus on Asian drama, is going to face increased pressure in 2021. However, Viu still has the advantage of being a well-recognised brand in the region, with ample localised content and a sizable number userbase.

Disney will launch Disney+ Hotstar in more countries in Southeast Asia in 2021. The streamer is already available in Indonesia but it is the Indian version – Disney+ Hotstar, which offers Disney content as well as Star India IP – rather than simply the international offering. This indicates that, apart from offering Disney content, Disney+ aims to become a global distributor of Indian programming and compete with other international Indian online video players such as Yupp TV, Alt Balaji and Eros Now.

The online video market remains fragmented in markets like Vietnam, where there is no single big player in the market. The entry of more global players is putting pressure on smaller players in the market that have the same focus on content offerings. Second-tier players in local markets are likely to merge or be acquired by a bigger player to survive in the long run. A smaller player with a strong content focus in a niche market such as Japanese animation or sports focus is also likely to succeed.

In 2021, Omdia anticipates more mergers, acquisitions and exits in the media industry. As the market becomes overcrowded, consolidation becomes inevitable. Market consolidation is already happening in more developed Asia and Oceania markets such as Australia, New Zealand, South Korea, Japan, and Taiwan. This trend has only just begun in Southeast Asia, with Hooq’s exit from the market and Tencent’s acquisition of iflix.

Jun Wen Woo is a senior analyst for TV and online at OMDIA, which like TBI is part of Informa. The excerpts above are from her recent report, 2021 Trends to Watch: TV & Online Video in Southeast Asia.