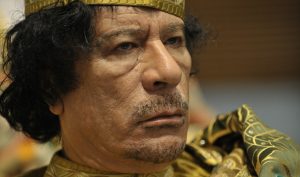 The 1 x 90-minute investigative documentary, with the working title of The Search For Gaddafi’s Billions will follow two Dutch journalists, Misha Wessel and Thomas Blom, as they enter the mysterious world of spies, special forces and political insiders, who are all hunting for Gaddafi’s missing money.

VPRO/NPO in the Netherlands are the lead commissioners of the film, which is being co-produced with ZDF/Arte and Brook Lapping in association with Gebrüder Beetz Filmproduktion.

The documentary will air in the UK as part of BBC4’s Storyville strand and was commissioned by Mandy Chang, commissioning editor for Storyville. It is being executive produced by Greg Sanderson and Karen Edwards for Brook Lapping and distributed by All3Media International.

Greg Sanderson, director, London Television at Zinc Media, said: “Enigmatic in life, it is no surprise that Gaddafi’s legacy is a tale of intrigue and violence. This film follows a deadly trail, covering large parts of the world, to find the missing billions”

Mandy Chang added: “The Hunt For Gaddafi’s Billions is a terrific investigation into an under reported African story and we are thrilled to be showing the film as part of a brilliant run of Storyvilles this Autumn and Winter 2020.”