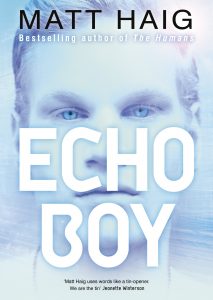 Submarine has brought long-time collaborator Tommy Pallotta on board the project. He co-developed the animation technique that has previously been used in sci-fi feature A Scanner Darkly and docudrama Waking Life.

The technique is also being employed on animated drama Undone, which the prodco is currently working on for Amazon Prime, while the upcoming Richard Linklater feature Apollo 10 ½: A Space Age Adventure is also in the works at Submarine for Netflix.

Echo Boy is set in the year 2115 and tells the story of teenager Audrey Castle, whose life is shattered when her parents are killed by a malfunctioning robot. However, she is forced to come to terms with her fears and prejudices when she meets another such machine that has human emotions.

Haig said that Submarine is “the perfect home” for an adaptation of his story. “It is a novel with a level of scope and ambition which needs to be factored into the adaptation, and I am confident Submarine’s visual flair and imaginative creativity make them equal to the challenge.”

Femke Wolting, co-founder and co-MD at Submarine, added: “Matt’s book is futuristic but also intensely human – and has the combination of an original world and resonant truth we look for in a story.”