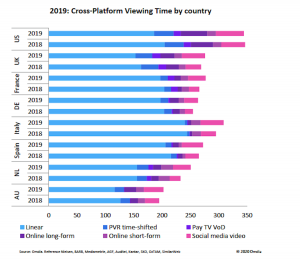 Viewing habits are changing rapidly but how has the soaring number of streamers affected linear consumption, and what about watching content on apps such as TikTok? Rob Moyser, senior analyst at TBI sibling Omdia, provides some choice highlights from this year’s Cross-Platform Television Viewing Time Report.

The annual Omdia Cross-Platform Viewing Time report analyses TV and video consumption trends across the US, Australia and the top six markets in Europe: the UK, France, Germany, Italy, Spain, and the Netherlands.

This year’s report again revealed a raft of findings, with average total daily viewing time increasing by four minutes on last year to stand at 306 minutes per-person per-day, while average linear TV viewing time declined in all but one market. Here are five more highlights; for the full report click here.

Linear viewing limps along in US

Cross-platform television viewing time in the US fell by 3.1% in 2019 to 295 minutes per-person per-day, returning to pre-2009 levels, in line with total viewing time before the rise of on-demand viewing methods. Consumption has fallen by more than an hour (61 minutes) since 2016. The acceleration of cord-cutting in the US pay TV market has taken a severe toll on linear viewing time over the past few years with pay TV subscriptions falling by 6.7% (-6 million subscribers) in 2019. Meanwhile, the growth in on-demand services and rise in cord-nevers has further exacerbated this decline in linear viewing, with OTT subscriptions increasing by 32% (+51 million subscribers) in 2019.

OTT on the up down under

Linear TV viewing time in Australia fell for the sixth consecutive year in 2019 to 116.3 minutes per-person per-day, down from 170.8 minutes in 2013 and its peak of 181.0 minutes in 2011. The decline in Linear TV viewing time in Australia is largely due to young people not embracing traditional broadcast TV in the same way as their older counterparts did in the past. Instead this younger demographic is turning to online viewing for their content needs. Online short and long-form viewing recorded significant increases in viewing time in 2019. Online long-form viewing led the rise, up an impressive 55% to 20.6 minutes per-person per-day, whilst online-short form viewing time jumped from 12.6 minutes to 13.7 minutes, an increase of almost 9% over the same period.

TikTok jumps in the UK…

Online video consumption showed no sign of slowing down in the UK market in 2019, with viewing time rising by 49.4% to reach 40.8 minutes. TikTok’s huge surge in new user accounts for much of this uptake, with the social media app overtaking both Snapchat and Instagram within the year – jumping from 2.2 minutes of viewing to 8.9 minutes (up 305.8%). This growth is set however to slow down within the next two years as it becomes heavily saturated among its core younger users, and new entrants like Firework and legacy players like Instagram and Facebook begin to implement more features similar to TikTok’s.

… and soars in Germany

TikTok has seen explosive growth in Germany, becoming the leading social media platform by average viewing time.
The country exhibits the lowest average social media video viewing time across the countries sampled, driven primarily by significantly reduced relative consumption of Facebook and, to a lesser extent, Instagram. Nevertheless, average daily social media viewing time increased by 69% YoY in 2019 to reach over 24 minutes per-person per-day. This growth was predominantly fuelled by TikTok which grew more than 300% over the course of 2019 to become Germany’s social media platform with the highest average viewing time per-person per-day. TikTok has thus taken the lead from Facebook which had held the top position in Germany for almost 10 years.

Rob Moyser is a senior analyst for Omdia and covers the television market in Western and Eastern Europe, tracking key developments in the pay-TV and free-TV industries from a cable, satellite, terrestrial, and telco perspective. His work also focuses on cross-platform TV viewing time in Europe.