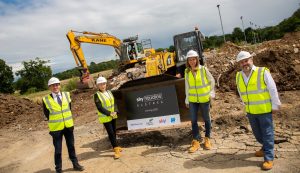 Sky’s investment in the facility is being backed by its owner Comcast and is in partnership with sister-company NBCUniversal.

Legal & General will be financing and developing the scheme, which is located in the borough of Hertsmere, north of London.

Work to clear the site ready for construction begins this month.

Over the first five years of operation, it is expected that Sky Studios Elstree will generate up to an additional £3bn ($3.8bn) of production investment in the UK’s creative economy from Sky, NBCUniversal and other producers, according to Sky.

The final design for Sky Studios Elstree envisages 12 sound stages on site, with the ability to merge together and sub-divide multiple sound stages simultaneously, providing flexibility and scalability to accommodate productions of all sizes.

Sky said that the flexible design would provide Sky Studios and NBCUniversal with a COVID-19-ready set up, while production facilities and digital suites on site will also be set up to facilitate remote working.

UK secretary of state for culture and MP for Hertsmere Oliver Dowden said: “Sky Studios Elstree will become home to the best-loved films and TV shows of the future, championing British creativity on the global stage. It will also bring investment, jobs and opportunities to people across Hertsmere – cementing Elstree & Borehamwood’s reputation as ‘The British Hollywood’.”