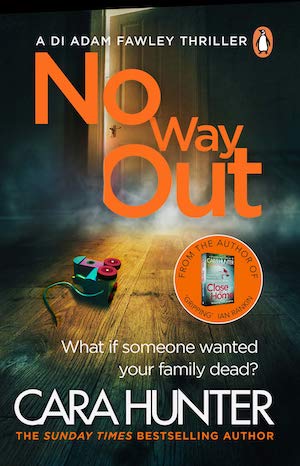 The four-book series of novels begins with Close To Home, first published in 2017, and also includes In the Dark, No Way Out and All The Rage.

The Oxford-based thriller franchise, which has sold over one million copies to date in the UK and across 25 territories worldwide, follow detective inspector Fawley as he deals with domestic tragedies and crimes that demand answers from the family and friends of the victim.

Castlefield was launched in June 2019 by MD Hilary Martin and creative director Simon Judd, both of whom previously worked at BBC Drama North and have credits on shows including In The Flesh, The Secret Of Crickley Hall and BBC One crime series In The Dark.

The label, based in Manchester, focuses on drama that have global appeal but no broadcaster/streamer has yet been attached to the DI Fawley adaptation.

Hunter said: “I’ve always ‘seen’ the Fawley books play out in my head as I write them, and the style I developed for them was a deliberate attempt to replicate the feel and pace of the best TV crime – the short scenes, the fast pace, and the changing points of view. Hilary and Simon completely get what the books are all about and have a wonderful feel for the characters. I can’t think of a better producer for the series than Castlefield.”

Martin and Judd added: “Cara collides noisy, epic crime stories with vivid, visceral characters that you just can’t look away from. Her razor-sharp depiction of contemporary life is a gift and we can’t wait to get cracking.”