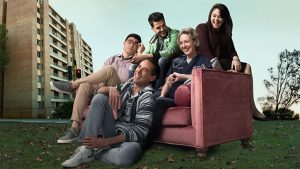 BBC One in the UK has acquired the first two seasons of Australian serial drama The Heights, with the first run confirmed to begin in a daytime slot on 15 June.

The Heights‘ addition comes as broadcasters look for international shows to fill schedules affected by the Covid-19 production shutdown, with the second season of the drama set to air on the BBC later this year.

Carla-Maria Lawson, head of BBC daytime and early peak, described the show as a “slice of life from the melting pot that is urban Australia”. It was acquired for the BBC by Sue Deeks, head of programme acquisition.

In related news, the UK pubcaster has extended fellow NBCU drama The Capture into a second season, after it became the biggest new title of 2019 on its iPlayer streaming service.

The show, which has sold around the world, is produced by NBCU-owned Heyday Television and NBCUniversal International Studios. Season two will be written and directed by Ben Chanan.

The show is produced by Empreinte Digitale for NBCUniversal International Networks’ crime channel 13th Street (aka 13eme Rue) in France and is sold by local distributor Playtime.

Walter Iuzzolino, co-founder and curator of Walter Presents, said the show was “a dark, twisted psychological thriller with plenty of cliffhangers and a unique, compelling premise…”

The series has already aired on NBCUIN’s other 13th Street branded channels, including Calle 13 in Spain and 13 Ulica in Poland. It will also debut on 13th Street in Germany, Austria and Switzerland, and on Proximus in Belgium.

Queen (11 x 50-minues) and Ek Thi Begum (aka The Mafia Queen, 14 x 30-minutes) are both inspired by true events. The former brings to life the story of Shakthi Seshadri, a reluctant actress and politician – and a non-conformist – as she rises to power in the Indian state of Tamil Nadu as its youngest female chief minister.

Ek Thi Begum tracks the life of a woman who turns femme fatale, pursuing the most dangerous underworld gangsters of Mumbai to avenge her husband’s murder.

Krishnendu Majumdar has been appointed as the new chair of the British Academy of Film and Television Arts (Bafta).

The award-winning TV producer and director has been involved with the organisation for 14 years and a deputy for the past year. His tenure will run for three years, which is the newly extended term for Bafta chairs.

The appointment makes Majumdar the first person of colour to take on the role in Bafta’s 73-year history as well as the youngest chair for 35 years.

Majumdar co-founded the London-based prodco Me + You Productions in 2012, alongside Richard Yee. He produced Channel 4 drama I Am and comedy Hoff The Record.