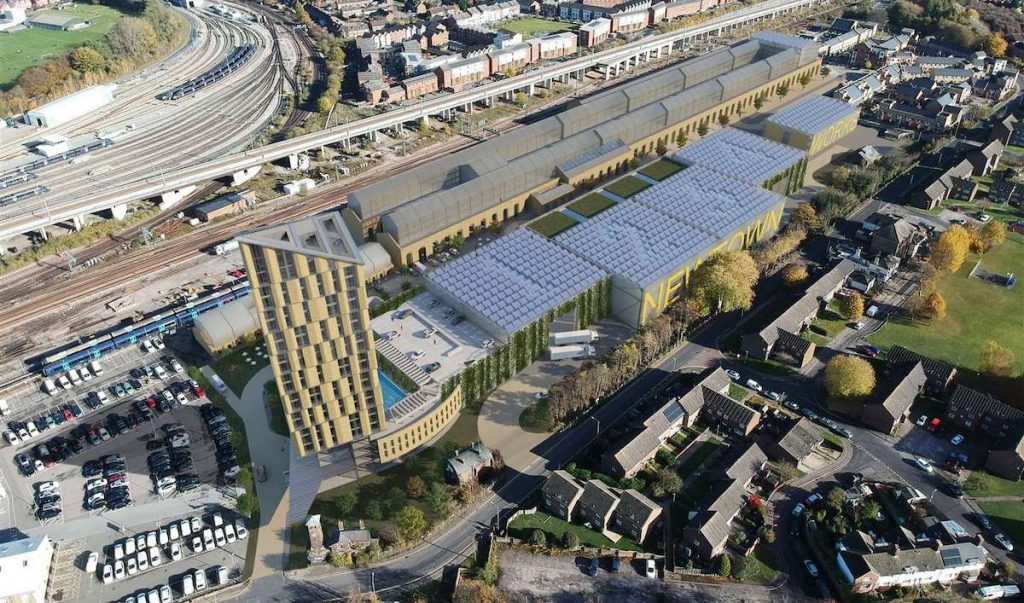 The greenlight has been given to a proposal for a huge new UK-based production studio in Kent, which has already courted the interest of streamers including Netflix and Amazon.

The project, approved in a virtual meeting by Ashford Borough Council yesterday, is being supported by property developers Quinn Estates and spearheaded by TDCI co-founders Piers Read, who produced The Inbetweeners and Peep Show, and Jeremy Rainbird, who launched the prodco Merman.

They plan to convert the 15-acre Newtown Rail Works site into Ashford International Studios, a new TV and film studio that they say will create thousands of jobs and also offer hotel and retail space. The project is scheduled to be completed next year with the studio launching in early 2022.

The site will benefit from its proximity to Ashford’s international station, which provides access to Eurostar train services that run to Paris and Amsterdam.

Part of a UK-wide strategy

TDCI has previously acquired Twickenham Film Studios and has plans to invest £50m to expand those facilities, while it is also working on projects in Liverpool as part of a £500m UK-wide stategy to provide more production space across the country.

TCDI’s Read and Rainbird said: “Amid this current global pandemic, it is extremely exciting to be given the go-ahead by the council to start work on what will become one of the UK’s biggest creative hubs.

“Global streaming giants have already expressed interest in the scheme as demand for their services booms and before there is a huge backlog in production, as people stay at home and burn through original content at record levels.

“We have the ability to create thousands of jobs for people, which is crucial at this time, and we will also be able to ensure creative talent and skills are harnessed and nurtured through our planned education centre. We are thrilled that the council recognise the importance of Ashford International Studios and have given consent to this development, which will deliver huge opportunities through its massive expansion of the industry in the UK.”

Studio space has been at a premium in the UK over recent years, with producers finding space increasingly hard to find. Disney has a long-term deal at Pinewood Studios and last year, Netflix struck a deal to secure space at London’s Shepperton Studios, putting further pressure on other outfits.

It has prompted several recent plans for expansion, including Sky’s development of a 32-acre film and TV studio at North London’s Elstree, which set to bring about more than 2,000 jobs to the UK creative sector.