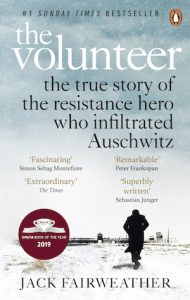 The title, which was named Costa Book Of The Year last month, is the untold but true story of Witold Pilecki, a covert operative who volunteered to be captured and taken to Nazi concentration camp Auschwitz.

His mission was to infiltrate the camp, organise a resistance from within and gather evidence of the atrocities being committed against European Jews. However, his story has been little told, until Fairweather’s book. The publishers are WH Allen/Penguin Random House UK and Custom House/Harper Collins in the US.

House Productions has secured a multi-territory deal for the film and TV rights to The Volunteer as part of their financing partnership with Access Entertainment, the financing outfit backed by former BBC boss Danny Cohen. House’s co-founders Tessa Ross and Juliette Howell will develop the project.

Ross said: “Jack’s book is an astonishing account of a vital story that demands to be told. Witold Pilecki’s heroism was remarkable and it is a great honour to be entrusted with this book so we can share his story.”

Fairweather added: “I’m delighted that Witold Pilecki’s inspirational story of defiance in the face of man’s greatest evil has found a filmmaker of Tessa’s power and vision. In her hands this once unsung hero will reach the audience he deserves.”

The BBC’s commercial arm took a 25% stake in House in 2016, while Access has a first-look deal with the prodco.