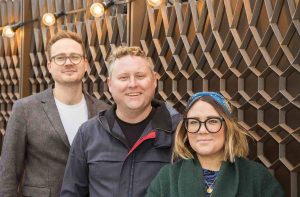 Hall will become head of development at Great Scott, which has been launched by Leon Wilson, former managing director of Talkback Thames, and Ed Sleeman, who held the same role at Talkback.

London-based Great Scott has been in the works for several months and is focused on making entertainment, comedy entertainment, factual entertainment and scripted comedy shows for broadcasters and streaming platforms in the UK and global markets.

The company has been backed by All3, with all formats and shows distributed by its sales arm, All3Media International. Several projects are already in development alongside an existing but yet to be revealed show “for a major UK broadcaster.”

Hall, meanwhile, joins from Hungry Bear Media where she worked across its development and production teams. Previously, she series produced Comedians Giving Lectures for UK network Dave and has also worked for Talkback and 12 Yard Productions.

Wilson and Sleeman developed and executive produced an array of shows during their time at Talkback, including Harry’s Heroes, Your Face Or Mine and Through The Keyhole. Fremantle hired Jonno Richards as MD of Celebrity Juice producer Talkback in July, having reunited Talkback and Thames as part of a wider restructure at its UK unscripted division in 2017.

Sleeman and Wilson, who are joint managing directors at Great Scott, said: “Partnering with All3Media gives us the backing and scale to match our ambition to create and deliver innovative, returnable and scalable formats for British and global markets, including streaming platforms where we see huge new potential for entertainment and scripted comedy shows.

“We want the very best creative talent to find a home at Great Scott and so we are thrilled to have Susie join us and will be announcing further creative hires shortly.”

Jane Turton, CEO of All3, added: “Ed and Leon are really talented and have a fantastic track record of developing and growing successful formats which have become hugely popular, long-running, international hits.”

Wilson and Sleeman were advised by Tom Manwaring of Helion Partners.