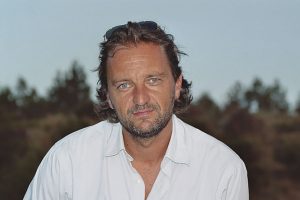 Mirage is the story of the destiny of an ordinary woman, Claire, who is thrust into the dangerous world of espionage and has to take control of her fate. Our first writing challenge was to combine the plot of a spy thriller with the emotional ingredients of a family drama. Finding the balance between these ingredients – an ordinary family, the geo-strategic stakes of espionage and the riveting suspense of a thriller – was crucial to guarantee the series works as a stand-out example of the genre.

At the same time, we needed to ensure audiences everywhere relate to our female lead — so that every viewer is prepared to follow Claire all along her extraordinary adventure in a location that is just as extraordinary: Abu Dhabi.

It’s precisely because of this need that writing for a broad audience watching on multiple networks is such an exciting challenge. Espionage is far from our daily concerns, and rooted in sometimes complex issues such as ideology and geo-political strategy. With Mirage, our ambition is to dive into this world through the eyes of an ordinary woman, ready to live a dangerous adventure for emotional reasons that everyone can easily understand, and with whom audiences have a strong and immediate empathy.

Spy series are often carried by characters already involved in the world of espionage. In Mirage, on the contrary, Claire doesn’t know anything about this world. For her, diving into this grey world is a leap of faith. And since she’s driven by basic human motivations, any viewer can understand her decisions.

Story-wise, the presence of two networks during the development phase (France TV and ZDF) created a challenge for us to build an immediate connection between Claire and the viewer in order to throw them both into these two mysterious arenas: the world of espionage and Abu Dhabi.

Claire’s character needed to overcome her French identity. Basically, she could be any Western expat who lands in a modern El Dorado to start over and soon finds herself thrown into a larger-than-life thrilling adventure. As a result, the series speaks to viewers all over the globe, since Claire’s trajectory is that of an ordinary woman determined to go beyond her own past ‘mirages’. And who can claim they have no ghosts in their closet?

“The presence of four partners – The Alliance’s France TV and ZDF, and Canada’s Bell and Superchannel – with each potentially attracted by one ingredient over another didn’t make the task easy. But it forced us to have a clear vision of the DNA of our show.”

We won’t lie: the presence of four partners – France TV and ZDF for the Alliance, and Bell and Superchannel for Canada – with each potentially attracted by one ingredient rather than another, didn’t make the task easy. But it forced us to have a clear vision of the DNA of our show. Having written a pilot before bringing the broadcasters on board was key.

If there were differences of opinion on the mix of ingredients and in the storytelling, it was my role as showrunner to understand the constraints and wishes of each partner in order to address their notes within the natural perimeter of the show — satisfying all partners without betraying its DNA.

It’s a role I would describe as more a respectful stubbornness rather than subservient diplomacy. But this obsessive fidelity to an original point of view requires constantly convincing everyone, draft after draft. And, ultimately having several partners benefitted the show because it forced the creators (Bénédicte Charles, Olivier Pouponneau and myself) to fine-tune our point of view.

Ultimately, throughout this long journey into the heart of the espionage world, our goal is to tell the coming-of-age trajectory of a woman determined to go through her own mirages in order to gain her freedom. A woman not only torn between two men, but also between her self-fulfilment and her family.

And the original part of her destiny is that her path of emancipation starts with her rebirth as a secret agent – a promise of many seasons to come for Mirage.

Franck Philippon is the creator and writer of Mirage (6 x 60 minutes), one of the first projects to emerge from Europe’s Alliance of public broadcasters. It is being distributed internationally by Cineflix Rights.