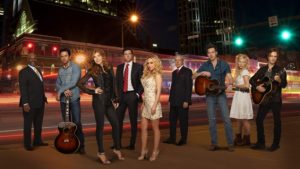 Shepherd’s Retreat (8 x 60 minutes) is described as “a mystery thriller with a musical identity” that will feature original songs and explores the ramifications on a community when a local musician is discovered dead.

Buchanan was previously president of the Opry Entertainment Group and conceived and executive produced hit US drama Nashville, which ran for six seasons on ABC and then CMT.

“Claire Mundell and Synchronicity are the perfect producing partners to help bring this show to life,” said Buchanan, president of Steadibeat. “We plan to capture the same authenticity and dramatic flair that is true to Scotland that we found with Nashville.”

Mundell, MD and creative director at Synchronicity, added: “We’re thrilled that Steve chose to bring Shepherd’s Retreat to Synchronicity and we’re excited to be developing a show with a modern twist to a much-loved genre. Shepherd’s Retreat is an evocative, soulful, compelling drama with all of the best elements of a mystery thriller, taken into a new realm by music rooted in Scotland’s enigmatic rural landscape.”

Most recently, Synchronicity produced critically acclaimed BBC drama The Cry, written by Jacquelin Perske. The prodco is also developing a TV series based on Heather Morris’s best-selling novel The Tattooist Of Auschwitz.