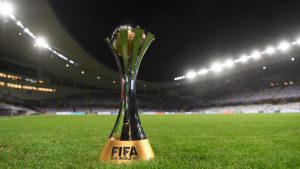 The European Broadcasting Union (EBU)’s Eurovision Sport has signed a deal with Japanese agency Dentsu for exclusive media rights to the FIFA Club World Cup 2019 and 2020.

The EBU is an international alliance of 56 public service media organisations, and includes the likes of ITV, Channel 4, TF1 and RTE. It is best-known for producing the annual Eurovision Song Contest.

Under this deal, 37 territories including Poland, Portugal and the Republic of Ireland will see free-to-air coverage of the tournament. The UK, which is represented by Uefa Champions League winners Liverpool, will see FTA coverage on the BBC.

The eight-match knockout tournament features six Confederations club champions and one club from the host nation. It takes place in Qatar between December 11-21.

Pascal Fratellia, head of football rights at Eurovision Sport said: “We are very pleased to sign this new FIFA Club World Cup deal, building on a relationship initiated back in 2011. This agreement provides FIFA and Dentsu with a strong and reliable broadcast commitment from EBU Members and reaffirms our ambition and dedication to showcase premium football competitions free-to-air for fans.”

Host nation Qatar will also host the 2022 FIFA World Cup, and Liverpool has stated its concern over migrant worker deaths in the nation that have happened during stadium construction. The club’s chief exec Peter Moore has sent a letter to the Fair/Square human rights organisation calling for all “unexplained deaths” to be “investigated thoroughly”.

The news also follows a similar announcement from the EBU that it had acquired the rights to the Women’s Euro 2021 and several other properties in over 50 European countries.

Negotiated through the Eurovision Sport division, the deal includes more than 20 events over a three-year period and includes rights to the youth and futsal national team competitions in addition to the Women’s Euros.

EBU members will provide coverage of the Women’s Euro 2021, held in England, across their linear and digital platforms, in addition to free-to-air coverage of relevant matches in Uefa’s youth tournaments.