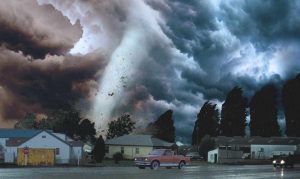 Cineflix Rights has acquired exclusive global distribution rights to science and natural history series Storm Stories: The Next Chapter, from US broadcaster The Weather Channel.

The 8 x 60 minute show is from Towers Productions and explores dramatic tales of severe weather including devastating hurricanes, tornadoes, blizzards, wildfires, mudslides, and presents first-person accounts of those who survived them.

The show, which combines archival footage, CGI, and vivid reenactments, was the number one new series of the year for The Weather Channel, performing 40% above average audiences for original programming, according to Cineflix.

Richard Life, head of acquisitions at Cineflix Rights, said the show “blends incredible footage with amazing survivor testimonies which will be equally gripping for global audiences.”

The deal with The Weather Channel television network was brokered by Giuliana Benvenuto, manager of acquisitions for North America.

Showtime is preparing a docuseries that will profile the work of a New York Post gossip columnist, with Brian Grazer and Ron Howard exec producing.

Gossip Starring Cindy Adams (working title) will chronicle the history and rise of Adams and her gossip columns in Rupert Murdoch’s New York Post, as well as major events from her 40 years in the business.

It is from Grazer and Howard’s Imagine Documentaries in cooperation with the New York Post, with Jenny Carchman (The Fourth Estate) producing and directing.

HBO is preparing a documentary that explores cyber warfare ahead of the 2020 elections in the US.

The show is based on The Perfect Weapon: War, Sabotage And Fear In The Cyber Age, written by journalist David E Sanger. John Maggio (The Newspaperman) is attached to direct and exec produce.

The doc will explore the rise of cyber conflict as the primary way nations now compete and sabotage each other, with interviews from military and intelligence officials.

It is being produced by Maggio’s Ark Media, which was launched with Barak Goodman and Rachel Dretzin.