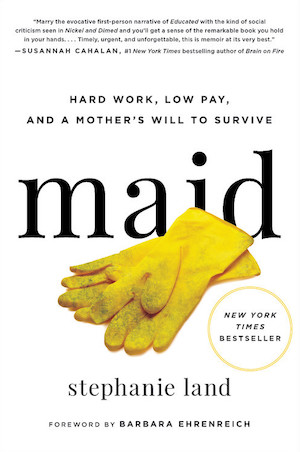 Netflix has ordered an adaptation of Stephanie Land’s best-selling novel Maid, which chronicles the life of a single mother who turns to housekeeping to make ends meet.

Maid is from writer and showrunner Molly Smith Metzler (Orange Is The New Black) and is being produced by John Wells Productions, Margot Robbie’s LuckyChap Entertainment and Warner Bros. Television.

The show follows the single mother as she battles against poverty, homelessness, and bureaucracy, with the story told primarily through her point of view. Netflix described the show as “an inspiring exploration of poverty in America.”

“Stephanie Land’s book is a powerful and necessary read, with incredible insight into the struggles people face whilst just trying to get by,” said the LuckyChap trio. “We are thrilled to partner with John Wells and his amazing team, as well as WBTV and Netflix, to help this story reach as wide of an audience as possible.”

Wells added: “Stephanie tells the searing and remarkably human story of a young woman battling to find a secure future for herself and her infant daughter, Mia, in the face of overwhelming odds and governmental assistance programs of impossible complexity.”

In related news, the US streamer has extended thriller Black Summer into a second season. The eight-parter is from Netflix Studio Production and will begin production next year in Alberta, Canada, with Karl Schaefer exec producing alongside John Hyams, who also is attached as showrunner.

Earlier this week the streamer commissioned six-part docuseries Don’t F**k This Up, which follows comedian Kevin Hart’s day-to-day life and explores the events that have shaped his life.

The series is from Hartbeat Productions, Lionsgate, Makemake, 3 Arts Entertainment and Magical Elves, with the show including interviews with Hart’s friends and family, as well as archival footage from his childhood and early stand-up days.