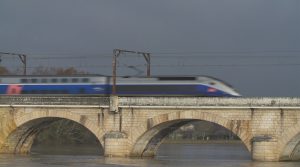 RMC Découverte in France has ordered a factual documentary that explores some of the most impressive trains of the past 80 years, marking an expansion of its Record-Breaking series franchise from Pernel Media.

Record-Breaking Trains tracks locomotives that have pushed the limits of speed and engineering prowess since World War II and is based around the stories of three engines: the CC7100; the high-speed record-breaker TGV; and the AGV.

The 1 x 70’ documentary follows Pernel Media’s Record-Breaking Bridges, which also aired on RMC Découverte and achieved an audience share of 2.4%, above the timeslot average.

“Record-Breaking Trains is another edition to our strand of engineering factual programs that delves into the history of fascinating technologies with exciting storytelling,” said Kissous, president of Pernel Media.

The commission is the latest RMC Découverte order for Pernel Media, which is also behind a second season of Ancient Superstructures for the French broadcaster. Pernel has also produced four seasons of Wheeler Dealers France for RMC, with the latest fourth run set to launch on 14 November in primetime.