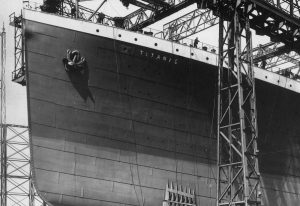 Channel 5 in the UK has ordered a feature documentary from UK-based Blink Films that charts the series of errors that caused the Titanic to sink.

10 Mistakes That Sank The Titanic (1 x 90 minutes) follows the famed ship’s journey from construction to catastrophe, and reveals that there was no single factor which caused the ocean liner to sink.

The show instead focuses on a cascade of events that contributed to the disaster, in which more than 1,500 people died. It is produced and directed by Mike Ibeji, with Blink Films’ co-founder and creative director Dan Chambers exec producing alongside Alison Turner.

Chambers said: “The story of the supposedly ‘unsinkable’, cutting edge ocean liner designed specifically to survive a collision with an iceberg remains one of the most enduring tales of our time.

“Audiences may know some of the details about the catastrophe, but this programme reveals all the key errors, and how they combined, to cause one of the greatest ever maritime disasters.”

The series was commissioned by Lucy Willis for Channel 5, with UK-based Drive distributing globally.