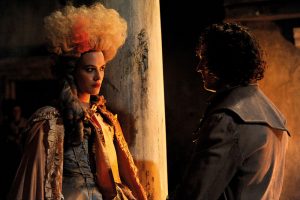 ITV Studios (ITVS) has increased its interest in UK-based Monumental Television to take a controlling stake in the Harlots producer.

ITVS, which had held a 26% stake, now owns a 51% majority in the UK production company, with the Alison Owen and Debra Hayward-founded firm now set to become more integrated within the UK commercial broadcaster’s prodco network.

ITV Studios Global Entertainment (ITVSGE), which has held a minority stake in the company since its launch in 2015, will continue distributing its TV content worldwide.

Monumental’s slate to date includes three seasons of Harlots (pictured), now exclusively commissioned by Hulu, and Ghosts for BBC One, while ITVS said it is in “advanced development” on several other scripted series.

Julian Bellamy, managing director at ITVS, said: “Alison and Debra have proven to be a fantastic fit within the ITV family over the last four years. They’re outstanding creatives with fantastic talent relationships and I can’t wait to work even more closely with them as they start the next phase of Monumental’s growth.”

Owen and Hayward added: “ITV Studios is at the forefront of all the exciting new developments in the television landscape and we are thrilled to continue our relationship with the incredible team there.”

Owen has been behind dramas including Case Histories and Temple Grandin, as well as numerous feature films such as Saving Mr Banks and Jane Eyre. Hayward is the producer of the upcoming movie adaptation of stage musical Cats, and was formerly head of film at Working Title Films.